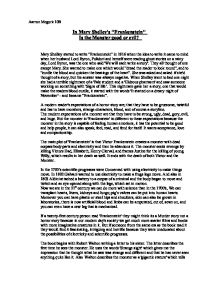 In Mary Shelley's ''Frankenstein'' Is the Monster good or evil?

In Mary Shelley's ''Frankenstein'' Is the Monster good or evil? Mary Shelley started to write "Frankenstein" in 1816 when the idea to write it came to mind when her husband Lord Byron, Polidori and herself were reading ghost stories on a rainy day, Lord Byron, was the one who said 'We will each write a story'. They all thought of one except Mary. She wanted to make one which would "dread the reader to look round", and to "curdle the blood and quicken the beatings of the heart". She was asked and asked if she'd thought of a story, but the answer was always negative. When Shelley went to bed one night she had a terrible nightmare of a 'Pale student and a 'Hideous phantasm' and saw someone working on something with 'Signs of life'. This nightmare gave her a story, one that would make the readers blood curdle, it started with the words 'It started on a dreary night of November' - and became "Frankenstein". A modern reader's expectations of a horror story are; that they have to be gruesome, twistful and has to have monsters, strange characters, blood, and of course a storyline. The modern expectations of a monster are that they have to be strong, ugly, dead, gory, evil, and huge. But the monster in 'Frankenstein' is different to these expectations because the monster in the story is capable of feeling human emotions, it has the potential to be good and help people, it can also speak, feel, read, and fend for itself. ...read more.

The monster has a love for nature and in real nature his love is the moon and stars they enchant him. But then he has a love for the nature of love, happiness, and family, as he watches one, one in a cottage. From this family he discovers language and learns their thoughts and feelings and understands what the family is saying. The monster also has a love for literature as he listens to Felix in the cottage when he is reading his books, the monster wants knowledge and to be intelligent. Listening to Felix later brings him to more pain because he learns about life and family, and questions himself about his life and family. My feelings toward this monster are sympathy and I feel that this thing is not a monster as he clearly has emotions and appreciates beautiful things and is made evil by humans. During the story the monster turns evil because he wanted acceptance from the family he was watching. When the family goes out for a walk he goes into the house and finds a blind man sitting on a stool. The monster sits by him and the blind man feels the monsters face and the monster starts to like the man and tries to talk to him. Then the family comes back and chased him out by beating him. The monster then says 'From that moment i declared ever-lasting war against the species, and, more than all, against him who formed me, and sent me forth to this unsupportable misery'. ...read more.

One thing a modern reader can learn about this book is that judgement and prejudice based on what people can look like can result in horrific consequences. Marry Shelley has proven this right in the book because throughout history whenever people have been treated badly things have happened like the holocaust, slavery, war and terrorism. Mary Shelley was right because in her book the monster was treated badly and it started killing a lot of people. The second thing modern readers learn is about the dangers and misuses of science. Science can be used for good uses like helping the ill and elderly but Mary Shelley warns us not to mess with the natural order of things, and not to use science too much because it could lead to evil events. Although we can not argue about the monster being evil because it killed lots of people and got Justine hung, he wasn't created evil. He was made evil by the way he was treated. There is no pure evil character but Frankenstein did evil things as well by creating the monster and abandoning it so they are as bad as each other. The French philosopher Jean - Jacques Rousseau wrote a book and in the book he argues that men's nature is harm less and that men become evil in society. This is proven to be true in the book 'Frankenstein', because Mary Shelley uses physically a disfigured character to show people can become emotionally disfigured. Aarron Mcgurk 10B ...read more.