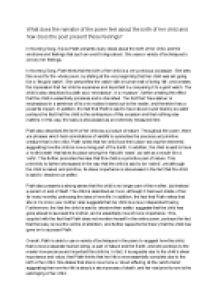 In Morning Song, Sylvia Plath presents many ideas about the birth of her child, and the emotions and feelings that the event brings about.

Transfer-Encoding: chunked ﻿What does the narrator of the poem feel about the birth of her child and how does the poet present these feelings? In Morning Song, Sylvia Plath presents many ideas about the birth of her child, and the emotions and feelings that such an event brings about. She uses a variety of techniques to convey her feelings. In Morning Song, Plath feels that the birth of her child is a very precious occassion. She sets this mood for the whole poem, by stating at the very beginning that her child was set going like a ?fat gold watch?. She personifies the watch with a human trait of being ?fat?, and creates the impression that her child is expensive and important by comparing it to a gold watch. ...read more.

Overall, Plath is able to use a variety of techniques in the poem to suggest how this child, that is now a separate human being, is part of nature and the Earth, and she portrays to the reader how precious and important this child is. In fact, it is arguable due to the child?s sheer importance and value, that Plath thinks that her life is now essentially complete due to the birth of her child. She states that she is now more a ?cloud? effacing ?at the wind?s hand?, suggesting that now her life is simply a slow process of death, and her real priority now is the upbringing of her child. ...read more.