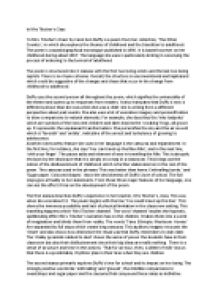 In Mrs. Tilschers Class by Carol Ann Duffy is a poem in which she explores the themes of childhood and the transition to adulthood.

﻿In Mrs Tilscher?s Class ?In Mrs. Tilscher?s Class? by Carol Ann Duffy is a poem from her collection, ?The Other Country?, in which she explores the themes of childhood and the transition to adulthood. The poem is a autobiographical monologue published in 1990. It is based however on her childhood during about 1967. The language she uses is particularly striking in conveying the process of maturing to the turmoil of adulthood. The poem is structured into 4 stanzas with the first two being octets and the last two being septets. There is no rhyme scheme. Overall, the structure is unconventional and haphazard which could be suggestive of the changes and chaos that occur in the change from childhood to adulthood. Duffy uses the second person all throughout the poem, which signifies the universality of the theme and opens up to responses from readers. It also insinuates that Duffy is now a different person than she was when she was a child- she is writing from a different perspective about past events. She also uses a lot of evocative imagery and personification to draw comparisons to natural elements. For example, she describes the ?inky tadpoles? which are symbols of the innocent children and later depicts the ?croaking? frogs, all grown up. ...read more.

There is a sense of structure and time in the actions: ?That for an hour, then, a skittle of milk? shows that there is a predictable, rhythmic plan in their lives when they are children. The second stanza primarily explores Duffy?s love for school and its impact on her being. The strongly positive words like ?enthralling? and ?glowed?, the childlike comparisons to sweetshops and sugar paper and the caesuras that compound those ideas as definitive opinions on school. It shows her unflinching love for her childhood life. The juvenile metaphors and similes show her innocence. This is contrasted with the horror of ?Brady and Hindley?, the child assaulters and murderers in the. Again, the suspense created by the caesura leads to a let down where she claims that the murderers ?faded?. That phrase shows the sense of security and safety school provides. Then there is the statement that ?Mrs Tilscher loved you?. This directly shows the love and happiness she received in school. It creates a sense of seemingly endless joy. The transferred epithet in ?good gold star? furthers the notion of contentment. The last line of the second stanza, ?a xylophone?s nonsense..? introduces a new concept- growing up. The children consider their old toys as ?nonsense? which shows the beginning of their maturation. ...read more.

The last line hence gives Duffy?s final stance on the difference between childhood and adulthood. The tone of the poem is one of nostalgia. The positive light she holds her childhood in is evinced through the use of the words ?enthralling?, ?loved? and ?good?. The mood evoked is remembrance because of the ubiquity of pining for childhood. The tone becomes progressively troubled as the poem progresses. ?Brady and Hindley? initially evoke fear. Then words like ?electricity? and ?storm? exacerbate this apprehension. The mood towards the end of the poem is perhaps wistful or melancholy. Quotes: 1. ?You could travel along the Blue Nile? 2. ?Tana. Ethiopia. Khartoum. Aswan? 3. Mrs. Tilscher chanted 4. Chalky pyramids rubbed to dust 5. That for an hour, then a skittle of milk 6. Laugh of a bell 7. This was better than home 8. Glowed like a sweet shop 9. ?coloured paper? ?enthralling books? 10. ?good gold star? 11. ?Mrs. Tilscher loved you? 12. ?slowly, carefully, shaved? ? asyndeton (without and) 13. ?xylophone?s nonsense? 14. inky tadpoles changed from commas to exclamation marks 15. ?jumping and croaking out of the lunch queue? 16. dunce 17. kicked him 18. stared at your parents, appalled, when you got back home 19. smiled, then turned away 20. ?hot, fractious untidy? 21. air tasted of electricity- gustatory 22. ?sexy sky?- alliteration, pathetic fallacy 23. ??sky split open into a thunderstorm? ...read more.