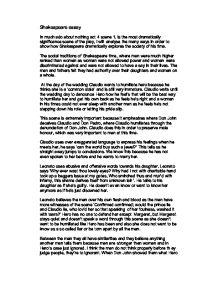 In much ado about nothing act 4 scene 1, is the most dramatically significance scene of the play, I will analyse the many ways in order to show how Shakespeare dramatically explores the society of his time.

Shakespeare essay In much ado about nothing act 4 scene 1, is the most dramatically significance scene of the play, I will analyse the many ways in order to show how Shakespeare dramatically explores the society of his time. The social traditions of Shakespeare time, where men were much higher ranked than women as women were not allowed power and women were discriminated against and were not allowed to have a say in their lives. The men and fathers felt they had authority over their daughters and women on a whole. At the day of the wedding Claudio wants to humiliate hero because he thinks she is a 'common stale' and is still very immature. Claudio waits until the wedding day to denounce Hero how he feel's that will be the best way to humiliate her and get his own back as he feels he's right and a woman in his times could not ever sleep with another man as he feels he's not stepping down his role or letting his pride slip. ...read more.

Hero has no one to defend her except Margeret, but Margeret stays quiet and doesn't speak a word through this scene as she doesn't want to be humiliated like Hero has been and also she does not want to be know as a so called liar or be torn apart by all the men. Between the men they all have similarities and they believe anything another man tells them because men are stronger then women and in Hero's case just ignored. I think the men do not think properly before they judge people, they're to ignorant. When Don John showed them what Hero was supposedly like which they believed straight away. Hero has no chance of defending herself as she is a woman and woman and accepts her position as a Elizabethan woman. She also knows that no one will believe her 'O God defend me how am I beset!' This shows us that she is in an impossible situation and has no way out from this unless the person who told Claudio and Don Pedro confess. ...read more.

Benedick is very different to the other men because he treats Beatrice equal. He sticks by her and does anything to keep her happy 'By this hard, Claudio shall render me a dear account. As you hear of me, so think of me'. Benedick and Beatrice's relationship is the opposite of Claudio's and hero. As the women didn't really have their own role they were told what to do. Women of today can now have a more equal marriage like Benedick and Beatrice. It shows us that not all women in relationships have to be arranged and ruled by the men but can come together through true love and feelings. This scene is important because it illustrates how men treated women, how their families were treated, it shows how women were treated if they were not to obey their so called women like role and shows their attitude towards women. As well it tells us how we should treat women referring to Benedick and Beatrice which is how Shakespeare must have felt about the inequality of men towards women. This is also a powerful scene to watch with lots of drama, hate and love which is why it attracts lots of audiences. ...read more.