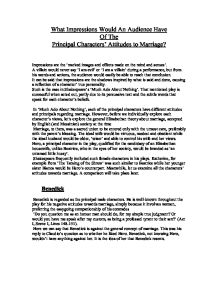 In 'Much Ado About Nothing', each of the principal characters have different attitudes and principals regarding marriage. However, before we individually explore each character's views, let's

What Impressions Would An Audience Have Of The Principal Characters' Attitudes to Marriage? Impressions are the 'marked images and effects made on the mind and senses'. A villain would never say 'I am evil' or 'I am a villain' during a performance, but from his words and actions, the audience would easily be able to reach that conclusion. It can be said that impressions are the shadows inspired by what is said and done, causing a reflection of a character' true personality. Such is the case in Shakespeare's 'Much Ado About Nothing'. That mentioned play is successful when acted out, partly due to its persuasive text and the subtle words that speak for each character's beliefs. In 'Much Ado About Nothing', each of the principal characters have different attitudes and principals regarding marriage. However, before we individually explore each character's views, let's explore the general Elizabethan theory about marriage, accepted by English (and Messinian) society at the time Marriage, to them, was a sacred union to be entered only with the utmost care, preferably with the parent's blessing. The ideal wife would be virtuous, modest and obedient while the ideal husband would be older, 'wiser' and able to control his wife and her views. ...read more.

No uncle, I'll none. Adam's sons are my brethren, and truly I hold it a sin to match in my kindred'. (Act II, Scene I, 51-56) Here, Beatrice tries to convince her uncle that she won't marry ever, and does so unsuccessfully at that, as there are some deliberate contradictions here. If she is Adam's brother, than doesn't that imply that she also was created from the same substance, mere dust? The use of valiant here highlights Beatrice's witty sense of humour; how can men, created from dust, be brave and courageous? 'I would rather hear a dog bark than a man swear he loves me' (Act II, Scene I, 53). Here, were hear Beatrice claim that a man's profession of his ardor towards her is no better than hearing a dog bark, indeed, the latter is more enjoyable to her. Again, this highlights Beatrice's resentment towards marriage. It seems that she and Benedick are oddly paired; their only common factor is their loathing of marriage. We can safely conclude that in Much Ado About Nothing, each of the major characters have different views and opinions, although all can lead back to the traditional Elizabethan theory. So, as a result, the audience would be able to distinguish each of the characters through their attitudes, creating a certain and unique impression for all. ...read more.