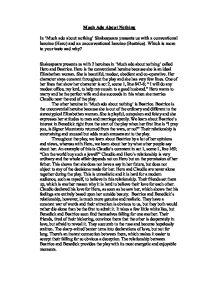 Much Ado About Nothing In 'Much ado about nothing' Shakespeare presents us with a conventional heroine (Hero) and an unconventional heroine (Beatrice). Which is more to your taste and why? Shakespeare presents us with 2 heroines in 'Much ado about nothing' called Hero and Beatrice. Hero is the conventional heroine because she is an ideal Elizabethan woman. She is beautiful, modest, obedient and co-operative. Her character stays constant throughout the play and she has very few lines. One of her lines that show her character is act 2, scene 1, line 847-8; " I will do any modest office, my lord, to help my cousin to a good husband." Hero wants to marry and be the perfect wife and she succeeds in this when she marries Claudio near the end of the play. The other heroine in 'Much ado about nothing' is Beatrice. Beatrice is the unconvential heroine because she is out of the ordinary and different to the stereotypical Elizabethan woman. ...read more.

It takes a few little white lies, but Benedick and Beatrice soon find themselves falling for one another. Their friends, tired of their bickering, convince them that the other is desperately in love, but afraid to reveal it. They succumb to the ruse and become hopelessly smitten. The sharp-witted banter turns into declarations of love, but not for long. There's an instant connection between them, which makes it easier to accept their falling for so obvious a deception. The relationship between Beatrice and Benedick provides the play with its most energetic and enjoyable moments. Beatrice and Hero are both the centre of different plots, devised by their friends. Hero is involved in a plot to make Beatrice and Benedick fall in love and this brings out her sense of humour, even though she is only going along with everybody else's ideas. Hero is the centre of a plot, when Don Pedro's brother Don John succeeds in making Claudio believe that Hero has been unfaithful to him, just before their wedding day. ...read more.

Beatrice is suited to a modern audience. She is witty and friendly and she adds much humour and excitement to the story. She shows several different sides to her character during the play including her bickering and sarcasm with Benedick, her romantic side when she find out Benedick loves her, her loyal side when she protects her cousin at the wedding, and her tough side when she expressed her anger towards Claudio. I think she is more genuine and realistic than Hero and I really enjoyed getting to know her down to earth character throughout the play. Hero's character is very reserved and does not really unfold in the play. Although she is the centre of interesting plots and storylines, she does not reveal her true personality, emotions or opinions. I think that Hero is much more suited to an Elizabethan audience as she is socially acceptable to them. She is pure and exactly the type of woman that men would want to marry, but in my opinion she does not bring much to the play and she is not to my taste. ...read more.