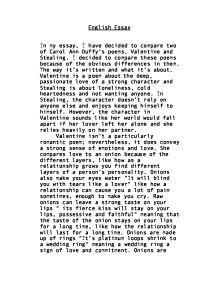 In my essay, I have decided to compare two of Carol Ann Duffy's poems, Valentine and Stealing.

English Essay In my essay, I have decided to compare two of Carol Ann Duffy's poems, Valentine and Stealing. I decided to compare these poems because of the obvious differences in them. The way it's written and what it's about. Valentine is a poem about the deep, passionate love of a strong character and Stealing is about loneliness, cold heartedness and not wanting anyone. In Stealing, the character doesn't rely on anyone else and enjoys keeping himself to himself. However, the character in Valentine sounds like her world would fall apart if her lover left her alone and she relies heavily on her partner. Valentine isn't a particularly romantic poem; nevertheless, it does convey a strong sense of emotions and love. She compares love to an onion because of the different layers, like how as a relationship grows you find different layers of a person's personality. ...read more.

Valentine is set out in an unusual form it's written more for impact than presentation. She uses single words like "Take it" for a forceful feel. This isn't a sentimental poem it's a poem about possessive, fierce love. Stealing is a poem about ruthlessness and cold heartedness. It starts like someone has just asked him a question about what is the most unusual thing he has ever stolen and he gives the answer "a snowman." He goes on to talk about why he stole the snowman. He steals the snowman because he thought it was magnificent and selfishly wanted it for himself. Part of the fun of taking the snowman was knowing that in the morning the children who he had stolen the snowman from would cry. ...read more.

They both seem a bit disturbed I suppose. In Valentine, there is an angry feeling in the way it's written. Her love sounds so strong it's almost fearsome and there's an angry way in which Stealing is written as well. Valentine is written in short direct sentences and Stealing is a long poem but it's still as direct. Different because the character in Stealing has no one and doesn't really want anyone so he's cruel to people instead, and the character in Valentine is very much in love with someone she enjoys being with and is terribly possessive over losing him. I enjoy reading Valentine because it's a powerful poem that is written with a lot of feeling. It's also blatantly honest. I don't like Stealing very much because of the style that it's written in. It isn't as affective as Valentine. ...read more.