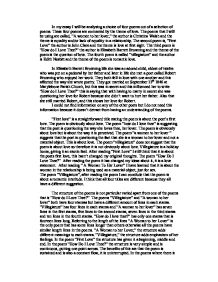 In my essay I will be analysing a choice of four poems out of a selection of poems. These four poems are connected by the theme of love. The poems that I will be using are called, &quot;A women to her lover,&quot; the author is Christina Walsh and the theme is e...

In my essay I will be analysing a choice of four poems out of a selection of poems. These four poems are connected by the theme of love. The poems that I will be using are called, "A women to her lover," the author is Christina Walsh and the theme is equality and/or lack of equality in a relationship. The second poem is, "First Love" the author is John Clare and the theme is love at first sight. The third poem is "How do I Love Thee?" the author is Elizabeth Barrett Browning and the theme of the poem is the question of love. The fourth poem is called "villegiature" and the author is Edith Nesbitt and the theme of the poem is romantic love. In Elizabeth Barrett Browning life she was an adored child, eldest of twelve who was put on a pedestal by her father and later in life she met a poet called Robert Browning who enjoyed her work. They both fell in love with one another and this affected the way she wrote poetry. They got married on September 12th 1846 at Marylebone Parish Church, but this was in secret and this influenced her to write "How do I Love Thee?" ...read more.

Then goes to saying, "My life and all seemed to turn to clay," saying that he can't do anything about it. He had no control of himself. In the second stanza in "A Woman to Her Lover" it is about perfection in everyway. "or if you think to wed with one from heaven sent whose ever deed and word and wish is golden," another question, describing someone angelic and everything they do is perfect. The first line is similar to the last line in the first stanza. "If that be what you ask, fool, I refuse you!" Any man that wants that is a fool. In the poem " Villegiature" the second stanza is about the way in which she sees him. "Your solid self, long leagues away," his physical form is far away. "Deep in dull books, had hardly missed me," when he was alive he was always reading books, working and he didn't miss her. "And through the blossom climbed and kissed me," all very romantic, he kissed her. In the poem "First Love" it is still describing the scene and what his love is doing to him. "And then my blood rushed to my face and took my sight away," it is embarrassing for him, he's blushing and she notices then she is so beautiful he went blind. ...read more.

In the poem "Villegiature" the tone is romantic because of the words softly lighted, pear-tree boughs hung white above you and pearls. The poem "First Love" has a romantic tone, words such as flowers, sweet and bloomed. In the poems "How do I Love Thee" and "A Woman to her Lover" the tone is confusion. There is no personification used in any of the four poems. In the poems "Villegiature," "First Love" and "How do I Love Thee" there is no assonance used. In the poem "A Woman to her lover" there is assonance used, for example: will and vanquished and golden and worship. This doesn't matter because poems aren't about rhythm, they are about the meaning as well. All the poems I have chosen are all quite similar in their title because all but "Villegiature" give the suggestion of love. The forms of the poems are all is also very similar in the way that the poem is delivered. The content of the poems are quite similar but the words in the poems have different meanings. Out of the four poems I like "A Woman to her Lover" because I like the way that it is perceived from men only wanting women for sex. It has a strong meaning to it. ...read more.