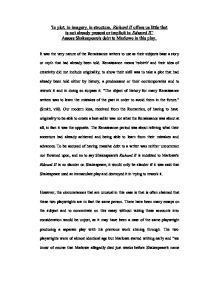 'In plot, in imagery, in structure, Richard II offers us little thatis not already present or implicit in Edward II. 'Assess Shakespeare's debt to Marlowe in this play.

'In plot, in imagery, in structure, Richard II offers us little that is not already present or implicit in Edward II.' Assess Shakespeare's debt to Marlowe in this play. It was the very nature of the Renaissance writers to use as their subjects base a story or myth that had already been told. Renaissance means 're-birth' and their idea of creativity did not include originality, to show their skill was to take a plot that had already been told either by history, a predecessor or their contemporaries and to rework it and in doing so surpass it. "The object of history for many Renaissance writers was to learn the mistakes of the past in order to avoid them in the future." (Smith, viii). Our modern idea, received from the Romantics, of having to have originality to be able to create a best-seller was not what the Renaissance was about at all, in fact it was the opposite. The Renaissance period was about reliving what their ancestors had already achieved and being able to learn from their mistakes and advances. To be accused of having massive debt to a writer was neither uncommon nor frowned upon, and so to say Shakespeare's Richard II is indebted to Marlowe's Edward II is no slander on Shakespeare, it would only be slander if it was said that Shakespeare used an immaculate play and destroyed it in trying to rework it. However, the circumstances that are unusual in this case is that is often claimed that these two playwrights are in fact the same person. There have been many essays on the subject and to concentrate on this essay without taking these accounts into consideration would be unjust, as it may have been a case of the same playwright producing a separate play with his previous work shining through. The two playwrights were of almost identical age but Marlowe started writing early and "we know of course that Marlowe allegedly died just weeks before Shakespeare's name first appeared in print." ...read more.

The play has all the makings for a vicious and bloody story but Shakespeare choose to ignore the historical facts and replaced them with scenes of discussion. Where, according to sources like Holinshed's Chronicles of England, Scotland and Ireland which Shakespeare is said to have used ("Edward II...is heavily indebted, as are Shakespeare's history plays, to the magisterial Chronicles of England, Scotland and Ireland compiled by Raphael Holinshed..." Smith, viii), Richard II was captured and taken to Flint Castle, Shakespeare has instead a surrender of power and an admittance of defeat without as much as a sword being drawn. As soon as Henry entered England again he was welcomed, and seemed to be on a tour of the country while Richard was away in Ireland, rather than being a threat to the throne. Shakespeare avoided any sign of battle, and there were plenty of chances, the army of Welshman simply disbanded, York admitted defeat without a fight and Richard, despite his high mood when he first arrived home, soon despairs of his situation and tells his men to leave. Even the murder of the Richard, at the end of the play, is immediately regretted by Exton himself, and Henry, to whom the murder is beneficial, is deeply saddened by the news: Though I did wish him dead, I hate the murderer, love him murder�d. The guilt of conscience take thou for thy labour, But neither my good word nor princely favour. (V.vi.39-42) This is all in sharp contrast to Marlowe's play, in which we see two battles for power and many executions. "Edward II offers a profoundly nihilistic view of history, steeped in blood and treachery and without the transcendental assurance of human love." (Smith, ix). If this quotation is accurate then we can already see a huge difference starting to emerge in, not only plot, but also theme and imagery. Unlike Shakespeare, in Richard II, Marlowe does not shy away from violence and battles, he does not use speeches and conversations to settle the arguments, instead he uses such scenes as act three scene two. ...read more.

We see Marlowe's use of it often: "But what are kings when regiment is gone, / But perfect shadows in a sunshine day?" (V.i.26-7) and Shakespeare plays on this and uses it as one of his most obvious images throughout the play. Richard sees the sun as "the searching eye of heaven" (III.ii.37) and so with his divine appointment sees himself as on the same level as the sun, sees himself as heaven's eye watching over and ruling his people. He says that Henry and his accomplices work at night because they are "Not able to endure the sight of day," (III.ii.52). Another image that is used a lot in both plays is that of blood, and this image in fact links the two plays in an unusual way because with it Shakespeare actually refers to Edward III, Richard's grandfather, when the Duchess of Gloucester refers to the seven brothers as "seven vials of his sacred blood" (I.ii.12). So with this image Shakespeare knowingly links his play with an image he saw used in Marlowe's play, he has a plot that is already linked through the royal family of the time and he strengthens this link by not only repeating the themes used but using one of these themes to refer directly to one of the characters in Marlowe's Edward II. It is clear that Shakespeare owes something to Marlowe in his play, and how much he owes is of course unknown but as we have seen there are instances where Shakespeare makes it very clear to the reader that, as well as the characters he has based his play on having close links with the characters in Edward II, the play itself has close links with Marlowe's. It would be wrong to say that Shakespeare is so indebted to Marlowe that the play is not entirely his own because they are written with so many variables within them but it is certain that there are parts of the plays that are beyond any coincidental link. Word Count: 3,298. ...read more.