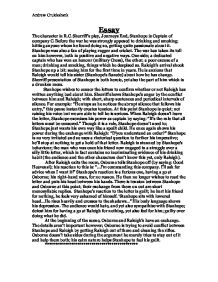 Essay The character in R.C. Sherriff's play, Journeys End, Stanhope is Captain of company C. Before the war he was strongly apposed to drinking and smoking; hitting anyone whom he found doing so, getting quite passionate about it. Stanhope was also a fan of playing rugger and cricket. The war has taken its toll on him however, both in positive and negative ways. One side; a dedicated captain who has won an honour (military Cross), the other; a poor excuse of a man; drinking and smoking, things which he despised so. Raleigh's arrival shook Stanhope up a bit; seeing him for the first time in years. He is anxious that Raleigh would tell his sister (Stanhope's fianc�e) about how he has change. Sherriff presentation of Stanhope is both heroic, yet also the part of him which is a drunken mess. Stanhope wishes to censor the letters to confirm whether or not Raleigh has written anything bad about him. Sherriff shows Stanhope's anger by the conflict between him and Raleigh; with short, sharp sentences and periodical intervals of silence. For example: "He stops as he notices the abrupt silence that follows his entry," this pause instantly creates tension. ...read more.

At the beginning of the scene, Osborne and Raleigh's have an exchange. The details aren't important however; Osborne is trying to avoid conflict between Stanhope and Raleigh by getting Raleigh out of there and cleaning the rifles. Osborne doesn't take sides during the argument he merely tries to stay out of it and help them both; his calm nature helps Stanhope to feel his guilt. ********************************************** In Act 2 scene 2, Stanhope is portrayed as a different leader. Hibbert is trying to escape from the trenches by pretending he has neuralgia. However, more likely is that he has a mental condition; shell shock etc (many men at the had mental conditions but this wasn't known till recently; people who tried to get away from the war-unless they had a physical disability-were shot as deserters). You can almost immediately tell that Stanhope is in control during the opening of the conversation between Hibbert and himself. "You have?" This is Hibbert's reaction to Stanhope telling him that he also has neuralgia. Stanhope catches Hibbert off guard; he acts like its no big deal whereas Hibbert is trying to worm his way home with the same condition; Stanhope is beginning to break apart Hibbert's lie at this point. ...read more.

The audience doesn't know whether or not he is going to shoot as he can be very unpredictable at times; the fact he ignores Hibbert's rants during the countdown suggest no sympathy. At this time the tension is high as Hibbert is ready to die and Stanhope shows no emotion; Stanhope seems to be brutally cruel. When Hibbert admits the truth, Stanhope is sympathetic: "I've tried like hell-I swear I have...]. Stanhope sits down beside Hibbert and puts an arm round his shoulder] I know what you feel Hibbert. I've known all along] How can you know?] Because I feel the same-exactly the same! " The physical gesture of putting an arm round his shoulder shows welcoming, kindness, friendliness etc. He also sympathises with Hibbert by saying he feels the exact same way; he demonstrates camaraderie by opening up to Hibbert and by telling him his true feelings; characteristics of a good leader, connection with the troops, a sympathetic ear and camaraderie. In conclusion, Stanhope is a good leader. Although he has a temper, can be petty at times and is a bad drunk; he always remains loyal to his troops even to the bitter end; he often puts his men before himself, a valiant display of camaraderie. ?? ?? ?? ?? Andrew Cruickshank ...read more.