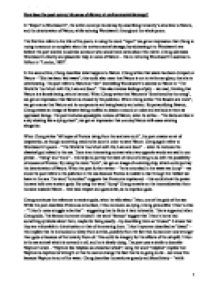 In &quot;Report to Wordsworth&quot; How does the poet convey his sense of dismay at environmental damage? .

How does the poet convey his sense of dismay at environmental damage? In "Report to Wordsworth", the writer conveys his dismay by describing humanity's atrocities to Nature, and the deterioration of Nature, while echoing Wordsworth throughout the whole poem. The first line refers to the title of the poem; in using the word "report" we get an impression that Cheng is trying to account or complain about the environmental damage; by addressing it to Wordsworth we believe the poet wanted to address someone who would have cared about this matter. Cheng addresses Wordsworth directly and pleads for help in name of Nature - this is mirroring Wordsworth's address to Milton in "London, 1802". In the second line, Cheng describes what happens to Nature. Cheng writes that waste has been dumped on Nature - "She has been laid waste"; this could also mean that Nature is not in its former glory, that she is deteriorating. ...read more.

When Cheng writes "all hopes of Proteus rising from the sea have sunk", the poet creates an air of desperation, as though something needs to be done in order to save Nature. Cheng again refers to Wordsworth's poem - "The World Is Too Much with Us; Late and Soon" - when he includes the classical god related to the sea. There is an interesting contrast when two opposite words are said in one phrase - "rising" and "sunk" - this helps to portray the state of mind of Cheng to do with the possibility of success of Proteus. By using the word "sunk", we get an image of a sinking ship, which could portray the deterioration of Nature. When the poet further writes - "he is entombed in the waste we dump" - we know the poet refers to the pollution in the sea because Proteus is unable to rise through the rubbish we leave in the sea. ...read more.

Triton's eyes are described as "dazed" - this implies that he is shocked or dizzy from a strike, possibly from the fact that humans are now stronger than gods or because of the toxicity from oil. This could be imagery for the effects of the oil spill; Triton is the sea animal which is covered in oil, and he is slowly dying. The poet uses a simile to describe Neptune's state - "Neptune lies helpless as a beached whale"; using the word "helpless" implies that Neptune is deprived of strength or that he cannot change the fact that he is going to die - we know this because Neptune is out of the water. Cheng describes humanity as greedy and bloodthirsty - "while insatiate man moves in for the kill"; the word "insatiate" describes the incessant appetite for killing. In this instance, Cheng denotes to the hunt for whales. ?? ?? ?? ?? Mai Pham Thanh 11D 1 ...read more.