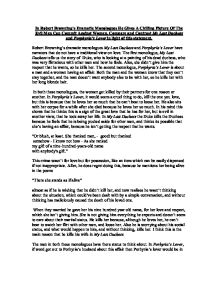 In Robert Browning's Dramatic Monologues He Gives A Chilling Picture Of The Evil Men Can Commit Against Women. Compare and Contrast My Last Duchess and Porphyria's Lover in light of this statement.

In Robert Browning's Dramatic Monologues He Gives A Chilling Picture Of The Evil Men Can Commit Against Women. Compare and Contrast My Last Duchess and Porphyria's Lover in light of this statement. Robert Browning's dramatic monologues My Last Duchess and Porphyria's Lover have narrators that do not have a traditional view on love. The first monologue, My Last Duchess tells us the story of Duke, who is looking at a painting of his dead duchess, who was very flirtatious with other men and how he feels. Also, she didn't give him the respect that he wants, so he kills her. The second monologue, Porphyria's Lover is about a man and a woman having an affair. Both the man and the woman know that they can't stay together, and the man doesn't want anybody else to be with her, so he kills her with her long blonde hair. In both these monologues, the women get killed by their partners for one reason or another. ...read more.

After, he does regret doing this, because he mentions her being alive in the poem: "There she stands as if alive" almost as if he is wishing that he didn't kill her, and now realises he wasn't thinking about the situation, which could've been dealt with by a simple conversation, and without thinking has maliciously caused the death of his loved one. When they married he gave her his nine hundred year old name, for her love and respect, which she isn't giving him. She is not giving him everything he expects and doesn't seem to care about their marital status. He kills her because, although he loves her, he can't bear to watch her flirt with other men, and loose her. Also he is worrying about his social status, and what would happen to him, and without thinking, kills her. I think this is the main reason that he kills his wife in My Last Duchess. ...read more.

But in My Last Duchess, the duchess is killed because she is flirting with other men, not giving him the respect he wants, and he has no control over her. His way of controlling her and stopping her from flirting, is to kill her, which is an evil and wrong thing to do. In both these monologues the men both seem to want the same thing: control and full possession of their women, to make them feel more powerful and more in control of the situation. In conclusion to these dramatic monologues, I think that Robert Browning does create a chilling picture of evil that men can commit to women, all for control of their women. In Porphyria's Lover the crime he commits is for the burning love for Porhyria, and although selfless, its is more for love than hate. Where as My Last Duchess, the crime he commits against his duchess is out of spite and for control, because he isn't getting the respect he wants. ...read more.