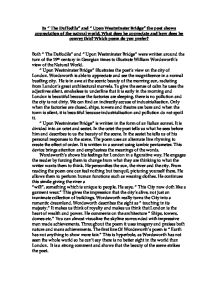 In &quot; The Daffodils&quot; and &quot; Upon Westminster Bridge&quot; the poet shows appreciation of the natural world. What does he appreciate and how does he convey this? Which poem do you prefer?

In " The Daffodils" and " Upon Westminster Bridge" the poet shows appreciation of the natural world. What does he appreciate and how does he convey this? Which poem do you prefer? Both " The Daffodils" and " Upon Westminster Bridge" were written around the turn of the 19th century in Georgian times to illustrate William Wordsworth's view of the Natural World. " Upon Westminster Bridge" illustrates the poet's view on the city of London. Wordsworth is able to appreciate and see the magnificence in a normal bustling city. He is in awe at the scenic beauty of the morning sun, radiating from London's great architectural marvels. To give the sense of calm he uses the adjectives silent, smokeless to underline that it is early in the morning and London is beautiful because the factories are sleeping, there is no pollution and the city is not dirty. We can find an indirectly accuse of industrialisation. Only when the factories are closed, ships, towers and theatre are bare and when the town is silent, it is beautiful because industrialisation and pollution do not spoil it. " Upon Westminster Bridge" is written in the form of an Italian sonnet. It is divided into an octet and sestet. In the octet the poet tells us what he sees before him and describes to us the beauty of the scene. ...read more.

" Glittering" is onomatopoeia and you can almost picture the sun creeping though the city in the early morning. " The very houses seem asleep," is personification and suggest there is no sound of people or not even a noise so it seems as if the houses are sleeping. " That mighty heart" is a metaphor and suggests London is the centre of the World, the main function just like the heart at the centre of the body pumping blood. The Wordsworth poem is changed in the penultimate line where he says " Dear God." Wordsworth is overwhelmed by the tranquility of London that he feels the need to invoke God's name. " The Daffodils" is also written by William Wordsworth but is very different both in structure and content. " The Daffodils" has four stanzas. Each stanza has six lines. There is a simple rhyme scheme. At the end of each stanza there is a rhyming couplet which creates a rhythm. In the opening statement " I wondered lonely as a cloud." Wordsworth uses a simile to compare his loneliness to a cloud drifting through the sky. It suggests the poet is dreamy and wondering " o'ver vales and hills" with no real purpose or direction. The cloud is not bound by any obstacle but can go wherever the whim of the wind takes it. ...read more.

Their "dance" is in complete coordination. The poet can not help being happy in such a joyful company of flowers. " A poet could not but be gay/ In such jocund company!" In the last stanza Wordsworth says he feels " vacant" or " pensive" the memory flashes upon " that inward eye/ That bliss of solitude," and his heart fills with pleasure and he " dances with the daffodils." Returned to the industrialised world the speaker is vacant of the joy that he found in nature- especially the daffodils. So when he recalls the daffodils he is reunited with the pleasure which he can not find amongst people. I prefer " The Daffodils". I like this poem because it shows what joy the memory can bring to the poet in times of contemplation, grief and loneliness. This poem is very touching and moving. We can see Wordsworth's use of imagery and emotion at its best. We can see that the poet holds daffodils and nature in high regard. The poem has a lot of nature images that you can practically see: the trees, the water, the stars and the daffodils. Unlike " Upon Westminster Bridge" which I feel is slightly sarcastic. In " The daffodils" Wordsworth's tone is merry and flows quickly and nicely; it's like he is creating a painting not a poem. ...read more.