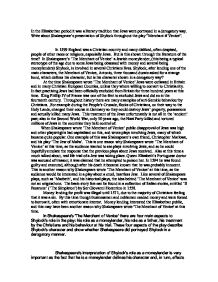 In the Elizabethan period it was a literary traditionthat Jews were portrayed in a derogatory way. Write about Shakespeare&amp;#146;s presentation of Shylock throughout the play &amp;#147;Merchant if Venice&amp;#148;.

In the Elizabethan period it was a literary tradition that Jews were portrayed in a derogatory way. Write about Shakespeare's presentation of Shylock throughout the play "Merchant if Venice". In 1599 England was a Christian country and many disliked, often despised, people of other races or religions, especially Jews. But is this shown through the literature of the time? In Shakespeare's 'The Merchant of Venice' a Jewish moneylender, (this being a typical stereotype of the age due to some Jews being obsessed with money and several being moneylenders) Shylock, is involved in several Christians lives. Shylock, after lending one of the main characters, the Merchant of Venice, Antonio, three thousand ducats asked for a strange bond, which defines his character, but is his character shown in a derogatory way? At the time Shakespeare wrote 'The Merchant of Venice' Jews were outlawed in Britain and in many Christian European Counties, unless they where willing to convert to Christianity. In fact practising Jews had been officially excluded from Britain for three hundred years at this time. King Phillip IV of France was one of the first to excluded Jews and did so in the fourteenth century. Throughout history there are many examples of anti-Semitic behaviour by Christians. For example during the People's Crusade, flocks of Christians, on their way to the Holy Lands, changed their course in Germany so they could destroy Jews' property, possessions and actually killed many Jews. This treatment of the Jews unfortunately is not all in the 'ancient' past; also in the Second World War, only 50 years ago, the Nazi Party killed and tortured millions of Jews in the countries they held control of. When Shakespeare wrote 'The Merchant of Venice' public disapproval of Jews was high and other playwrights had capitalised on this, and wrote plays involving Jews, many of which became quite popular. One example of this was Shakespeare's own friend, Christopher Marlowe, and his play 'The Jew of Malta'. ...read more.

hath not a Jew hands, organs, dimensions, senses, affections, passions?" 3:1:54-56 This speech evokes sympathy from an audience, which might not have felt much before this. This speech is when Shylock seems at his weakest, it seems a desperate speech from the heart, not the hard, sarcastic and quick-witted comments that he has used before. Here Shylock is just asking why the Christians treat him as less than human even though he is the same as them, and this is greeted by laughter on the part of the Christians who consider that even entertaining such a thought would be beneath them. Shylock is not portrayed as the model father, we assume this from his one scene with his daughter, Jessica, and of course the later scene after she has stolen his money. The first is not an ideal scene to draw upon, as Shylock seems inattentive, but may simply be worried about business. Throughout this scene, Shylock does seem preoccupied with business matters, as he remarks he is going to: "I'll go in hate, to feed upon The prodigal Christian" 2:5:14-15 He is referring, of course, to Antonio, the Christian's Christian. By saying this in the presence of his daughter Jessica suggests that he would often share information about his work with her, but unfortunately, we can only comment on what is seen in this scene and this is limited to a snapshot of their relationship. This is, of course, Shylock's portrayal as an ill-attentive, restrictive father. Many even say he treats her 'like a slave', as he calls her in between the conversations and gets annoyed when she does not respond immediately: "As thou hast done with me - What, Jesssica! - And I sleep and snore, and rend apparel out - Why, Jessica, I say!" 2:5:4-6 Unfortunately, other evidence for Shylock's portrayal as a father is sparse in this scene, as Shylock has only to order his daughter to lock up and not watch the Masque ball. ...read more.

As punishment he must give Antonio half of what he owns, give the half to Lornezo and Jessica when he dies and to become a Christian. In Shakespeare's "The Merchant of Venice", many feel Shylock, a Jewish main character, is portrayed in a derogatory way. In the Elizabethan period it was a literary tradition that Jews were portrayed in a derogatory way, but did Shakespeare follow the literacy traditions of others. At the beginning of the play, in Shylock first scene (1:3) the audience faces a split of conscience - listen to the reasons way he should not lend Antonio and Bassanio the three thousand ducats ( the 'You call me misbeliever...' speech 1:3:102-125) and feel pity for him or pay more attention to the bond he insists on and feel unsympathetic towards him. Though throughout the play the audience is put through a 'roller coaster of emotions towards Shylock: hating him one minute and pitying him the next' this original feeling normally sticks with the independent audience member right through the play. The play additionally teaches us about modern day society. Despite Shakespeare's works being written around five hundred years ago the messages in his plays still have meaning to today's populace. "The Merchant of Venice" makes us more aware of racism and xenophobia in today's society and how greed effects all of us, and also the basic, raw message in most of Shakespeare's plays, that love and grow and conquer any situation. In answer to the title I do feel that Shakespeare portrayed Shylock in a derogatory way. He was a at times cruel, selfish and vile, as well as being sadistic and masochistic over the pound of flesh, with him also being a strong stereotype to Jews of the day, being money obsessed and being a moneylender. Though despite this through the play you can still feel pity and sympathy for him, and see how society as a whole had turned him into the vindictive and bitter person he was in the play. ...read more.