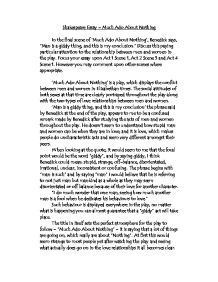 In the final scene of 'Much Ado About Nothing', Benedick says, &quot;Man is a giddy thing, and this is my conclusion.&quot; Discuss this paying particular attention to the relationship between men and women in the play.

Shakespeare Essay - Much Ado About Nothing In the final scene of 'Much Ado About Nothing', Benedick says, "Man is a giddy thing, and this is my conclusion." Discuss this paying particular attention to the relationship between men and women in the play. Focus your essay upon Act 1 Scene 1, Act 2 Scene 3 and Act 4 Scene 1. However you may comment upon other scenes where appropriate. 'Much Ado About Nothing' is a play, which displays the conflict between men and women in Elizabethan times. The social attitudes of both sexes at that time are clearly portrayed throughout the play along with the two types of love relationships between men and women. 'Man is a giddy thing, and this is my conclusion' the phrase said by Benedick at the end of the play, appears to me to be a confused remark made by Benedick after studying the acts of men and women throughout the play. He doesn't seem to understand how stupid man and women can be when they are in love; and it is love, which makes people do uncharacteristic acts and seem very different amongst their peers. When looking at the quote, it would seem to me that the focal point would be the word "giddy", and by saying giddy, I think Benedick could mean: stupid, strange, off-balance, disorientated, irrational, unclear, inconsistent or confusing. The phrase begins with "man is such" and by saying "man" I would believe that he is referring to not just man but mankind as a whole as they may seem disorientated or off balance because of their love for another character. ...read more.

Benedick I feel lists all these qualities in such a concise manner so that the image portrayed is of a woman that could never be so perfect; I think this is one reason Benedick lists for not falling in love. The image he creates is of a woman is one that simply would not exist in that time and the only character to satisfy a minority of the qualities is Beatrice. He then hides behind a hedge in the attempt of listening to what 'Monsieur Love' and Claudio have to speak about. Benedick continues to listen to what the two males have to say about Beatrice: "What was it you told me of today, that your niece Beatrice was in love with Signor Benedick", "she loves him with an enraged affection". It is words such as this, which deceive Benedick; He is led to believe that Beatrice is deeply in love with him. A lot of animal imagery is also used by the men when speaking about the love Beatrice has. "The fish will bite" a reference to hunting; and it is Benedick who plays the fish and the men who are the hunters and hunting down Benedick. Here the use of asides lets the cast share secrets with the audience and this is where humour is incorporated as the audience find it funny to see the two different minds of people thinking totally different, and it is this which all seems so "giddy" to the audience, as Beatrice knows nothing of what's happening in this scene. ...read more.

The main contradiction between the two soliloquies comes after this rather pathetic excuse - "When I said I would die a bachelor, I did not think I should live till I were married." This is really self-explanatory yet seems so "giddy" to the audience because he is prepared to use it as an excuse when considering this fake love. The two soliloquies show how Benedick is actually feeling inside. It is an intended emotional contrast and comes over to the audience so strong because he is not actually speaking to anybody, at times it may actually feel like he is speaking to the audience themselves. It also shows the drastic change that has taken place in Benedicks character from the beginning of the play. It also is a good way of informing the audience of such maters that other characters shouldn't know and this is how humour is brought about by audience involvement. It also carries the whole "giddy" act forward as Benedick is so strange in this scene it seems unreal for a change so big to take place. The ending part of this scene shows that the deception has worked and Benedick is in deep belief that Beatrice has love feelings for him. I feel that this part of the play is the best example of how "man is such a giddy thing" as it clearly conveys how such a character as Benedick can be transformed because of love. ...read more.