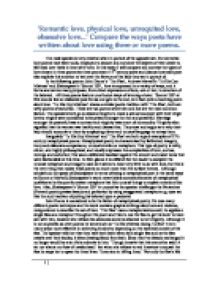 In the following poems: John Donnes The Flea, Andrew Marvells To His Coy Mistress and Shakespeares Sonnet 130, love is expressed in a variety of ways, and it forms and serves many purpo

'Romantic love, physical love, unrequited love, obsessive love...' Compare the ways poets have written about love using three or more poems. The male species is very creative when in pursuit of the opposite sex. For centuries love poems have been tools, employed to seduce and convince the objects of their desire to fall head over heels in love with them. In this essay I will compare and contrast the types of love shown in three poems by three prominent 17th century poets and discuss how each poet also exploits this emotion to win over the favours of the lady they are in pursuit of. In the following poems: John Donne's 'The Flea', Andrew Marvell's 'To His Coy Mistress' and Shakespeare's 'Sonnet 130', love is expressed in a variety of ways, and it forms and serves many purposes, from direct expressions of love, sex or lust, to devotion of the beloved. All three poems feature unorthodox ways of winning a lover. 'Sonnet 130' at first sounds like an elaborate joke but as one gets to the end, is in fact quite a touching poem about love. 'To His Coy Mistress' shares a similar poetic tradition with 'The Flea', both are witty poems of seduction. These are two poems where sex and lust are the main common factors. ...read more.

He then eloquently argues that they should put all thoughts of everything aside before time absorbs them (let's do it before we grow too old). 'But at my back I always hear/ Times winged Chariot hurrying near', (time is speeding by). When this argument fails to convince her, he turns to scare tactics, saying that worms will be the only ones enjoying her precious virginity. In other words she will die a virgin if she continues to waste time. 'Then Worms shall try/that long preserv'd Virginity'. This was a clever tactic as life expectancy in the 17th Century was low and therefore both women and men tended to age and die early. Shakespeare's sonnet is unlike the other two poems, while Donne and Marvell poems focus on seduction and sexual love, Shakespeare's sonnet is more about the realistic love for a real woman and not some idolised fake nonexistent version. Also 'Sonnet 130' is a contrast to his usual works which are typical flowery Petrarchan conceits that were fashionable in the Elizabethan era. Shakespeare's 'Sonnet 18,' is a typical example of a poem that put its subject on a pedestal, it begins, 'Shall I Compare Thee To A Summer's Day'. The lover here is described in hyperboles making the women sound like some sort of divine angel-like creature. ...read more.

In conclusion all three poets give a different representation of love showing the reader that love is a complex, powerful, and sometimes an all consuming and passionate emotion that a person can experience. They highlight in their individual ways through clever use of language the lengths a person goes to in the name of love. Shakespeare 'Sonnet130' though unconventional is false love versus true love, and is in my view the poem that truly represents love that is unconditional between two people who love each other regardless of status, wealth or beauty. Whereas Donne's, although brilliant, is more about lust and sexual desire as it is quite obvious to the reader that the speaker is only trying to satisfy his own sexual needs by using a cunning conceit (a flea) to entrap the woman into fulfilling his needs. This is not love in my view but plain and simply a horny guy trying to scratch an itch without any commitment. Similarly, in Marvell's poem the tactic although different, has the same aim, to get his mistress to have sex with him by whatever ways or means. He is a player and a gigolo and is out to seduce his mistress. Sex is all he is offering her and it seems she is smart enough to see that because she refuses his advances every step of the way. ?? ?? ?? ?? 1 ...read more.