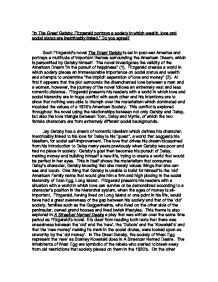 &quot;In The Great Gatsby, Fitzgerald portrays a society in which wealth, love and social status are inextricably linked.&quot; Do you agree?

"In The Great Gatsby, Fitzgerald portrays a society in which wealth, love and social status are inextricably linked." Do you agree? Scott Fitzgerald's novel The Great Gatsby is set in post-war America and portrays a multitude of important themes surrounding the American Dream, which is personified by Gatsby himself. The novel investigates the validity of the American Dream "in the pursuit of happiness" (1). Fitzgerald creates a world in which society places an immeasurable importance on social status and wealth and attempts to undermine "the implicit separation of love and money" (2). At first it appears that the plot surrounds the disenchanted love between a man and a woman, however, the journey of the novel follows an extremely vast and less romantic distance. Fitzgerald presents his readers with a world in which love and social hierarchy are in huge conflict with each other and his intentions are to show that nothing was able to triumph over the materialism which dominated and moulded the values of a 1920's American Society. This conflict is explored throughout the novel using the relationships between not only Gatsby and Daisy, but also the love triangle between Tom, Daisy and Myrtle, of which the two female characters are from extremely different social backgrounds. Jay Gatsby has a dream of romantic idealism which defines his character. ...read more.

The American Dream, as it arose in the earliest point with the American settlers was based upon the hypothesis that any man, no matter his origins could succeed in life based solely upon their skill and effort. The vast majority of the characters within the novel are "Midwesterners" who have travelled to the East, the power seat of the American Empire, looking for money, fame, success, glamour and excitement. Tom and Daisy, for instance, must have a huge house with a stable of polo ponies and friends in Europe in order to show their high status in a unrestrained community. Consequently, Gatsby feels as though he has to possess a huge mansion before he can feel confident that he may be able to recapture the love that he and Daisy once had, drawing her away from the lavish lifestyle that he knew she shared with Tom. This was where the idealism of the American Dream began to die with Gatsby. He enters a world where money takes priority over morals and materialism has begun to overshadow the spiritual side of the American Dream, allowing materialism to overpower his pursuit of love. Gatsby's house, the boldest representation of his wealth, was bought only because of its location. Gatsby saw it as a way of getting closer to the society that he wanted to get closer to. ...read more.

This causes Gatsby to truly understand the huge significance of money in Daisy's life. He had previously noted it, which is shown by his actions throughout the novel and his eagerness to show Daisy his mansion, his car and his coloured shirts; however, it becomes obvious here that he was not aware of the full extent of Daisy's materialism. He was naive enough to expect Daisy to leave Tom for him, believing his money to be a simple tool in attracting Daisy, yet not realising that this was infact the source of Daisy's love. Her "low thrilling voice" lends an essence to her otherwise superficial character which is indicated by her physical instability (illustrated by the author's use of balloon imagery). The fact that Gatsby has achieved his wealth through criminal activities is not important to Daisy, all she sees is the wealth and objects that Gatsby possess. Nick sides with Gatsby although he disapproves of his morals and belief that the end justifies the means. Nick recognises in Gatsby a wonderful trait that if present in everyone would make the world a better place. Gatsby has an innocence about him; a desperate plea to the world to treat him in the way he believes it should, and that appeals to Nick, "You're worth the whole damn lot of them put together," says Nick to Gatsby. ...read more.