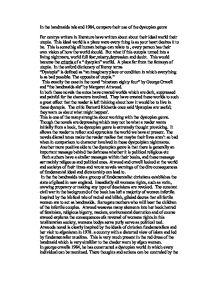 In the handmaids tale and 1984, compare their use of the dystopian genre.

In the handmaids tale and 1984, compare their use of the dystopian genre For centrys writers in literature have written about about their ideal world their utopia. This ideal world is a place were every thing is as your heart desires it to be. This is somethig all human beings can relate to , every person has their own vision of how the world should. But what if this eutopia turned into a living nightmare, world full fear,misery,depression and doubt. This would become the criteria of a " dystpian" worlld. A place far from the fantasys of utopia. In the oxford dictionary of litercy terms "Dystopia" is defined as "an imaginary place or condition in which everything is as bad possible. The opposite of utopia." This exactly the case in the novel "nineteen eighty four" by George Orwell and "the handmaids ale" by Margaret Attwood. In both these novels the autos have created worlds which are dark, suppressed and painful for the characters involved. They have created these worlds to such a great effect that the reader is left thinking about how it would be to live in these dystopia. The critic Bernard Richards once said 'dystopias are useful; they warn us about what might happen'. This is one of the many strengths about working with the dystopian genre. Though the novels are depressing which may not be what a reader wants initially from a book, the dystopian genre is extremely thought provoking. ...read more.

In 1984 orwell has given women in the novel a very negative light. Winston who can be said to reflect the voice of orwell has extreamly sexist views towards women. The only women in the novel that can be said to have a more positive oulook is winstons mother. He sees her pure safricial women and constantly reminises about her in the novel. 19984 is a very male dominated novel, there are few females character in it. Julia is the main female charater in the novel, and winstons attidude to her at times is extremly negative "he would flog her to death with a rubber truncheon.he would tie to a stake and shoot her full of arrows....he would ravish her and cut her throat at the moment of climax" winston applys this vulgar attidude not just to julia but to other female with in the novel " her thick arms reaching up fo the line , her powerful mare like buttocks protruded" this qote is where winston observes a prole women hanging out her washing and basicaly comparing her to a horse. Julias purpose in the novel is to serve as the male fantasy, she has sex with winston and is very promiscuous in that she has slept with may party men,she brings him forbidden food, she dresses up for him. The critic and feminist beatrix campbell sees the portralel of women in 1984 as very negative- "women are akin to the proletarian man in orwells work, they are rendered natural rather than skillful, almost infantile in their unconsciousness rather then alert and organised." ...read more.

She longs for so much more but is ultimatly helpless. But I think the novel as a whole is so much more then just womens fear of being used and helpless. It's a wrning of fundamentalist ideals to the extreme. I also feel that atwood convey a strenghth of people in general. Offred under the most extreme circumstances rebels. Even if she does not openly delcare it , internaly she does not accept the life she has and in the end she does escape. Whatever way offred escapes, the fact is she has survived. "survivol of the fitest" is the term which comes to mind. Every human has this basic instinct which is to survive, and the handmaids tale is one persons story of surival, this ultimatly leaves the reader with hope. 1984 does not have this same effectThe seat of power in a dystopian society can rest with an individual corrupt dictator or a corrupt governmental entity, but the effect is much the same; the individual is crushed and freedom curtailed. Nineteen-Eighty-Four is a prime example of this; the Party, with its figurehead in 'Big Brother', controls every aspect of its members' lives. Perhaps the most frightening thing about the nature of power in Orwell's society is its irrefutability. The Ministry of Truth can literally erase an individual from existence, while the Ministry of Love and its Thought Police can break one's soul. As we close on the broken Winston, utterly devoted to Big Brother, we see that there is no hope for the individual, as the Party is so infinitely secure. ...read more.