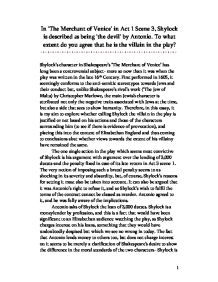 In 'The Merchant of Venice' in Act 1 Scene 3, Shylock is described as being 'the devil' by Antonio. To what extent do you agree that he is the villain in the play?

In 'The Merchant of Venice' in Act 1 Scene 3, Shylock is described as being 'the devil' by Antonio. To what extent do you agree that he is the villain in the play? Shylock's character in Shakespeare's 'The Merchant of Venice' has long been a controversial subject- more so now than it was when the play was written in the late 16th Century. First performed in 1605, it seemingly conforms to the anti-semitic stereotypes towards Jews and their conduct but, unlike Shakespeare's rival's work ('The Jew of Malta) by Christopher Marlowe, the main Jewish character is attributed not only the negative traits associated with Jews at the time, but also a side that sees to show humanity. Therefore, in this essay, it is my aim to explore whether calling Shylock the villain in the play is justified or not based on his actions and those of the characters surrounding him (to see if there is evidence of provocation), and placing this into the context of Elizabethan England and thus coming to conclusions abut whether views towards the extent of his villainy have remained the same. The one single action in the play which seems most convictive of Shylock is his argument with argument over the lending of 3,000 ducats-and the penalty fixed in case of its late return in Act 3 scene 1. The very notion of imposing such a brutal penalty seems to us shocking in its severity and absurdity, but, of course, Shylock's reasons for setting it must also be taken into account. It can also be argued that it was Antonio's right to refuse it, and so Shylock's wish to fulfil the terms of the contract cannot be classed as murder. Antonio agreed to it, and he was fully aware of the implications. Antonio asks of Shylock the loan of 3,000 ducats. Shylock is a moneylender by profession, and this is a fact that would have been significant to an Elizabethan audience watching the play, as Shylock charges interest on his loans, something that they would have undoubtedly despised but which we see no wrong in today. ...read more.

There are no reasons to suggest, both from this play, any other of Shakespeare's plays or historical evidence that Shakespeare was not a man oh his time, and therefore a strict Christian. In fact, it is clear from some of his other plays that Christianity and a natural order of things was considered by him essential for a person to lead a stable, good life (such as in Macbeth) and therefore, calling Shylock 'the devil' would suggest that Shakespeare was not altogether sympathetic towards Shylock's character. It is also possible, however, to debate that this was done to make the play more appealing to his audience, for, after all, he relied on the income they produced. But it is clear that this is not merely a passing comment- for in Act 2 scene 2, Launcelot repeatedly, in his soliloquy, calls him the devil- 'I should stay with the Jew my master, who- God bless the mark- is a kind of devil; and to run away from the Jew I should be ruled by the fiend, who- saving you reverence- is the devil himself. Certainly the Jew is the devil incarnation...' The implications of calling Shylock the devil are severe- it implies that Shylock is the anti-Christ, a heathen, and therefore goes against all of Christianity, until he becomes a representation of 'evil'. It also implies that Shylock, as that devil, is there to lead the Christian characters in the play astray, and it is interesting to note that the first time that Shylock is described as being 'the devil' by Antonio is whilst they are discussing the issues surrounding the bond. Therefore the debate as to whether Shylock, as the devil, is leading Antonio (the exemplary Christian) astray arises. However, there is another occasion where the term 'devil' is applied to another character in the play, but under altogether different circumstances. In Act 2 scene 3, Jessica describes Launcelot as 'a merry devil'. ...read more.

However, we cannot ignore the powerfully emotive speech which Shylock is allowed by Shakespeare in Act 3 scene 1. If Shylock was only intended to be a simple villain, it would seem pointless to plead his humanity, to try to show the similarities between Jews and Christians- their underlying humanity. It would have seemed more appropriate to make Shylock more like Christopher Marlowe's Jewish character Barrabas- violent, cunning, cruel and, ultimately, two-dimensional. Instead we are presented with a 'villain' who has been persecuted his entire life by those who are given authority to judge him, who seems resigned- 'Still I have borne it with a patient shrug For sufferance is the badge of all our tribe' (Act 1 scene 3) -and who has been provoked throughout. His one act of violence, of blood lust, arises from the fact that, for the first time, he holds power over those who torment him, his hatred is fuelled by a lifetime of humiliation, and his lack of mercy not only by this but by the events that occurred between the agreement of the bond and the trial. We can only assume that Shakespeare intended to make the play appealing to his first audiences, those he would have received money from, and therefore I am perhaps not judging Shylock as Shakespeare intended his audiences to, and that I am 'prejudiced' by my modern perspective which has not made me anti-semitic. However, as the essay question asks for my interpretation of Shylock as a character as opposed to an Elizabethan audience's, it is my conclusion that we cannot blame Shylock entirely for his actions without blaming his persecutors for their part in provoking Shylock to act as he did, and the evidence showing that Shylock has not only a villainous side but a more human one; capable of expressing complex humane emotions, leads me to believe that we cannot reduce Shylock's character to that of 'villain', although of the characters in the play his is certainly the most negatively portrayed. 1 ...read more.