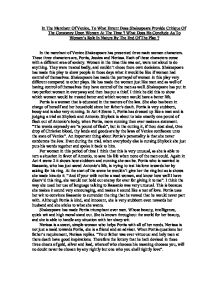 In the Merchant Of Venice, to what extent does Shakespeare provide critique of the constancy upon women at the time ? What does he conclude as to women's role in nature by the end of the play?

In The Merchant Of Venice, To What Extent Does Shakespeare Provide Critique Of The Constancy Upon Women At The Time ? What Does He Conclude As To Women's Role In Nature By The End Of The Play ? In the merchant of Venice Shakespeare has presented three main women characters. These three characters are, Portia, Jessica and Nerissa. Each of these characters come with a different area of society. Women in the time this was set, were not aloud to do anything. They were treated badly, and couldn't chose there own decisions. Shakespeare has made this play to show people in those days what it would be like if women had control of themselves. Shakespeare has made the portrayal of women in this play very different compared to other plays. He has made the women just like men and as well of having control of themselves they have control of the men as well. Shakespeare has put in two perfect women in everyway and then has put a thief. I think he did this to show which women would be treated better and which women would have a better life. ...read more.

Portia uses her wit to convince Bassanio to surrender the ring that he vowed that he would never part with. Although Portia is kind, and innocent, she is very stubborn even towards her husband and she sticks to what she wants. Shakespeare has made Portia triumphant over men. Whose beauty, intelligence, quick wit and high moral stand out. She is known throughout the world for her beauty, and she is able to handle any situation with her sharp wit. Nerissa is a sweet, simple woman who helps Portia with all of her needs. Nerissa is not just a maid towards Portia, she is a friend and an adviser. When Portia questions her father's requirement, Nerissa replies. "Your father was ever virtuous: and holy men at there death have good inspirations. Therefore the lottery that he hath devised in these three chests of gold, silver and lead, whereof who chooses his meaning chooses you, will no doubt never be chosen by any rightly but one who you shall rightly love". From looking at this conversation, I feel that both women have similar intelligence and that Portia is very trustworthy towards Nerissa. ...read more.

Jessica is a totally different character to Portia and Nerissa, as she has total control of herself. She is like a man, but more, as she not only controls herself, she controls her father. Shakespeare has made the portrayal of women very interesting, compared to the men. He has made the women trustworthy, considerate, cunning and helpful. The women in this play seem to be better off then men, as they are all intelligent. Portia and Jessica both defeated Shylock, as Portia was cunning and her sharp wit made Antonio win the trial. And Jessica decided to leave Shylocks bad ways, and do what she thought was best. Out of all of the three women Portia had the biggest role of them all. Portia was wise, cunning, helpful, trustworthy and had a sharp wit. All of these put together make a women of perfection. I think that Shakespeare wanted to make a different selection of women, so that you can see there differences. All of the women in the play were very kind and helpful to each other. Shakespears portrayal of women was the opposite of what it was in the days he made this play. He has made the women better off then the men, just to prove that women and men have the same intelligence, and that women can control themselves. ...read more.