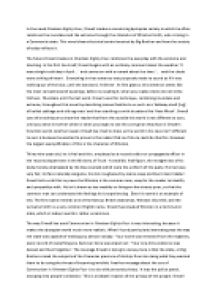 In the novel Nineteen Eighty-Four, how does Orwell creates a convincing dystopian society?

﻿In the novel Nineteen Eighty-Four, Orwell creates a convincing dystopian society in which he often combines the mundane and the extreme through the character of Winston Smith, who is living in a Communist state. This novel shows the total control exerted by Big Brother and how the society of today reflects it. The future Orwell creates in Nineteen Eighty-Four combines the everyday with the extreme and shocking. In the first line itself, Orwell begins with an ordinary comment about the weather ?It was a bright cold day in April?? and carries on with a remark about the time ?? and the clocks were striking thirteen?. ...read more.

Another reason Orwell has tried to show us the world in his novel isn?t different to ours is because he wanted to prove to the reader that our future could be like this. However the largest exemplification of this is the character of Winston. Thirty-nine years old, he is frail and thin, employed as a records editor or propaganda officer in the records department in the Ministry of Truth. ?A smallish, frail figure, the meagreness of his body merely emphasized by the blue overalls which were the uniform of the party. His hair was very fair, his face naturally sanguine, his skin roughened by coarse soap and blunt razor blades?. ...read more.

?Your name was removed from the registers; every record of everything you had ever done was wiped out.? ?Your one-time existence was denied and then forgotten?. The message Orwell is trying to convey here is that the state, or Big Brother scared the subjects of the Oceanian province of Airstrip One into doing what they wanted them to do using the threat of becoming invisible. Another message about the use of Communism in Nineteen Eighty-Four is to do with personal privacy. ?It was the police patrol, snooping into people?s windows.? This is a blatant invasion of the privacy of the people. Orwell writes this to make the reader understand just how careful the people had to be to avoid being captured for wrongdoing. I think it just goes to show the total control exerted by Big Brother. ...read more.