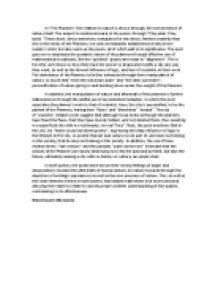 In The Planners the relation to nature is shown through, the non-presence of nature itself.

﻿In ?The Planners? the relation to nature is shown through, the non-presence of nature itself. The subject is mentioned early in the poem, through ?They plan. They build.? These short, direct sentences, metaphors for the direct, limited creativity that lies in the minds of the Planners, not only immediately establishes the idea in the reader?s mind, but also sums up the poem, all of which add to its significance. The poet goes on to emphasize the pedantic nature of the planners through effective use of mathematical vocabulary, like the ?gridded? spaces and roads in ?alignment?. ...read more.

In addition, the manipulation of nature and aftermath of the planners is further elaborated on through the skillful use of an extended metaphor, in which the poet associates the planner?s work to that of a dentist. Here, the city is personified, to be the patient of the Planners, having their ?flaws? and ?blemishes? ?erased?. The use of ?cosmetic? related words suggest that although it just looks as though the planners have fixed the flaws, that they have merely hidden, and not deleted them, thus resulting in a superficial city with no real beauty; no real ?face?. ...read more.

are slowly destroying not only the past and present, but also the future, ultimately leaving a city with no history or culture; an empty shell. In both poems, the poets have shown their strong feelings of anger and despondency towards the aftermath of human actions on nature towards through the depiction of nostalgic experiences as well as the non-presence of nature. This, as well as the clear element of time in both poems, has helped make them a lot more personal, allowing the reader to relate to and thus have a better understanding of the subject, contributing to its effectiveness. Word Count: 842 words ...read more.