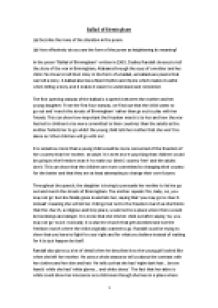 In the poem Ballad of Birmingham written in 1969, Dudley Randall chooses to tell the story of the war in Birmingham, Alabama

﻿Ballad of Birmingham (a) Describe the irony of the situation in the poem. (b) How effectively do you see the form of the poem as heightening its meaning? In the poem ?Ballad of Birmingham? written in 1969, Dudley Randall chooses to tell the story of the war in Birmingham, Alabama through the eyes of a mother and her child. He chose to tell their story in the form of a ballad, as ballads are poems that can tell a story. A ballad also has a fixed rhythm and rhyme which makes it useful when telling a story and it makes it easier to understand and remember. The first opening stanzas of the ballad is a speech between the mother and her young daughter. From the first four stanzas, we find out that the child wants to go out and ?march the streets of Birmingham? rather than go out to play with her friends. This can show how important the freedom march is to her and how the war has led to children to be ...read more.

Randall also gives us a lot of detail when he describes how the young girl looked like when she left her mother. He uses a whole stanza to tell us about the contrast with her clothes and her skin and hair. He tells us that she had ?night-dark hair? brown hands? while she had ?white gloves? and white shoes?. The fact that her attire is white could show her innocence as a child even though she lives in a place where there is constantly war. Her dark skin tone could reflect the darkness of the war that she lives in and the contrast shows that she is still able to stay pure and innocent in a place of darkness. Later on in the ballad, the mother lets her child go to church and ?smiled to know her child was in the sacred place? as the church was the safest place that she could think of for her child. ...read more.

Randall then introduces speech again when the mother finds the shoe her young daughter was wearing to church. In the last line, where the mother says ?But, baby, where are you?? the speech hits us with a wave of emotion as we already know the answer to this rhetorical question. The fact that the mother only found the shoe could also suggest to us that the force of the explosion had affected her child hugely and that it may have disassembled her, leading to her death. This thought makes us think of how war and all its conflict could be stopped and how war destroys people?s lives in a second. By using a ballad to tell the story of this mother and her child, Randall makes us use our imagination throughout the course of reading his poem. This makes the ballad much more effective as everyone?s imagination is different and this poem hits us differently on an emotional level. ...read more.