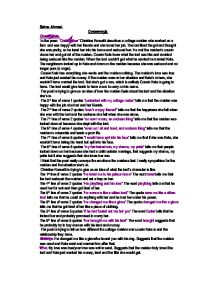 In the poem &quot;Cousin Kate&quot; Christina Rossetti describes a cottage maiden who worked on a farm and was happy with her friends and she loved her job.

Sahra. Ahmed. Coursework. Cousin Kate. In the poem "Cousin Kate" Christina Rossetti describes a cottage maiden who worked on a farm and was happy with her friends and she loved her job. The lord liked the girl and thought she was pretty, so he lured her into his home and seduced her. He met the maiden's cousin chose her and got rid of the maiden. Cousin Kate knew what the lord was like and avoided being seduced like the maiden. When the lord couldn't get what he wanted he married Kate. The neighbours looked up to Kate and down on the maiden because she was seduced and no longer pure (a virgin). Cousin Kate has everything she wants and the maiden nothing. The maiden's love was true and Kate just wanted his money. If the maiden were in her situation and Kate's in hers, she wouldn't have married the lord. But she's got a son, which is unlikely Cousin Kate is going to have. The lord would give lands to have a son to carry on his name. The poet is trying to give us an idea of how the maiden feels about the lord and the situation she's in. ...read more.

The Seduction. The poem is about a girl who goes to a party, gets drunk and meets a boy. He dances with her and gets her some more vodka to drink. She falls in love; he takes her to the docks and seduces her. The boy has done all this before and he is just after one thing. He despises the girl by calling her a "little slag". He is into football and talks to the girl about "Sammy Lee and Ian Rush." He is also into boxing and talks about " The Milk Cup and the next McGuigan fight." He goes down to the docks during school hours with his dad's porn magazines and paint thinner (he sniffs solvents). This tells me that he is a typical streetwise "bad boy". The quote "The kisses that tasted of nicotine", tell me that as a stereotypical bad boy he smokes and when he takes the girl down to the docks, he comes prepared with Listerine. The quote "His kiss was scented by Listerine." He uses this quote to lure the girl from the party t down the docks "I'll take you the river where I spend the afternoons, when I should be in school or eating me dinner. ...read more.

The poems are written in different times, one is written 100 yrs ago and the other is written in the 80's. "Cousin Kate" has a third person in the poem and "The Seduction" is more modern. Theme and storyline: The story is about two young girls who get seduced by men and left on their own by being pregnant. The girls are sad, depressed and ashamed of what they have done. Maiden and the girl: They both end up pregnant and they both love the boys. Her neighbours treated the maiden like dirt. The girl was just talked about by her neighbours. Lord and the boy: They are both after one thing and they got it. The lord is rich and powerful and has done this before. The boy is a smoker, glue sniffing wannabe thug. Well the poem "Cousin Kate" has the maiden looking back at it and the feelings she was going through. The poem "The Seduction" has the girl talking about what happened and onwards. The setting is very different the seduction was set in the docks and cousin Kate in the countryside. I prefer the seduction because it talks more about the matters and it's more modern. It gives the girls reaction towards being pregnant and how she would like to be anything else then the situation she's in and it's more descriptive than cousin Kate. ...read more.