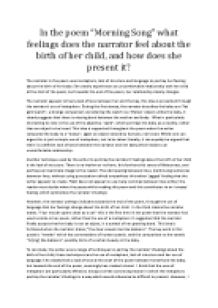 In the poem Morning Song what feelings does the narrator feel about the birth of her child, and how does she present it?

Transfer-Encoding: chunked ﻿In the poem ?Morning Song? what feelings does the narrator feel about the birth of her child, and how does she present it? The narrator in the poem uses metaphors, lack of structure and language to portray her feeling about the birth of her baby. She clearly experiences an uncomfortable relationship with her child at the start of the poem, but towards the end of the poem, her relationship clearly changes. The narrator appears to feel a lack of love between her and the bay, this idea is presented through the narrator?s use of metaphors. During the first stanza, the narrator describes the baby as a ?fat gold watch?, a strange comparison considering the watch is a ?lifeless? object unlike the baby, it clearly suggests that there is missing bond between the mother and baby. ...read more.

Another technique used by the writer to portray the narrators? feelings about the birth of her child is the lack of structure. There is no rhythm or no form, this furthers this sense of lifelessness, and portrays an inanimate image to the reader. The odd spacing between lines, (continuing sentences between lines, without using punctuation either) empathises this rather ?jagged? feeling that the writer appears to create. Plath does not appear to use many commas between lines either; the reader must decide when the pause whilst reading this poem and this contributes to an ?uneasy? feeling, which symbolises the narrator?s feelings However, the narrator perhaps indicates towards the end of the poem, through the use of language that her feelings change about the birth of her child. ...read more.

To conclude, the writer uses a range of techniques to portray the narrator?s feelings about the birth of her child, these techniques are the use of metaphors, lack of structure and her use of language. She clearly feels a lack of love at the start of the poem between herself and the baby, but towards the end of the poem, seemingly has created a bond. I think that the uses of metaphors are particularly effective, because of the convincing manor in which the metaphors portray the narrator?s feelings in a way which would otherwise be difficult to present. However, I feel that here use of structure is not as effective, some readers may find this a challenging concept to understand, and contributes to a rather dull atmosphere hence the writer could be alienating readers. ...read more.