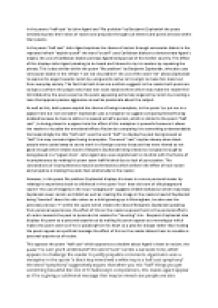 In the poems half-cast by John Agard and No problem by Benjamin Zephaniah the poets similarly express their views of racism and prejudice.

Transfer-Encoding: chunked ﻿In the poems ?half-cast? by John Agard and ?No problem? by Benjamin Zephaniah the poets similarly express their views of racism and prejudice through sub themes and poetic devices within their poems. In the poem ?half cast? John Agard explores the theme of racism through vernacular dialect in the repeated refrain ?explain yuself? the word ?yuself? uses Caribbean dialect to demonstrate Agard?s origins, the use of Caribbean dialect portrays Agard being proud of his mother country. The effect of this displays John Agard pleading to be heard and listened to by his readers by repeating the phrase. This is also similar within the poem ?No problem? by Benjamin Zephaniah, who also uses vernacular dialect in the refrain ?I am not de problem? the use of the word ?de? allows Zephaniah to express his anger towards racism by using words native to his origin to make him stand out from everyday society. ...read more.

The word ?cast? implies slavery when black people were casted away at sea to work in a foreign country because they were viewed as not good enough which relates back to Benjamin Zephaniah being viewed as not good enough by being placed in a ?pigeon hole?. John Agard also uses enjambment to interlink with the theme of incompleteness by making his poem seem half finished due to lack of punctuation. The connotations of incompleteness may be worthlessness which delivers the effect of how racism and prejudice is making the poets feel emotionally to the reader. However, in the poem No problem Zephaniah displays his views in a more personal manor by relating his experience back to childhood in the quote ?but I bear de brunt of silly playground taunts? the use of imagery in the noun ?playground? suggests childish behaviour which may imply Zephaniah views racism as childish as well as creating the image in the readers head of Zephaniah being ?taunted? ...read more.

Agard also uses a metaphor in the quote ?a black key mixed wid a white key is a half cast symphony? the word ?symphony? suggestively argues that when you mix ?half? things you get something beautiful like one of Tchaikovsky?s compositions, this makes agard appear as if he is giving a subliminal message that may be mixed race people are also beautiful as well as people who are pure, the effect of this on the reader makes Agard seem as if he is angry that mixed race people are not viewed as beautiful so instead he confronts them to the fact ?black? and ?white? piano keys work together to make a beautiful symphony. Overall, despite both poems being written in 1996 and sharing the same theme they offer different views and experiences on racism, ?half cast? is much more of a confrontational poem that seeks justification whereas ?No Problem? appears to be about personal experiences that aims to tyrannize its readers. ...read more.