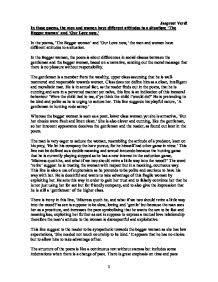 In the poems, 'The Beggar woman' and 'Our Love now,' the men and women have different attitudes to a situation.

Jaspreet Verdi In these poems, the men and women have different attitudes to a situation: 'The Beggar woman' and 'Our Love now.' In the poems, 'The Beggar woman' and 'Our Love now,' the men and women have different attitudes to a situation. In the Beggar woman, the poem is about differences in social classes between the gentleman and the beggar woman, based on a narrative, sending out the moral message that there is no pleasure without responsibility. The gentleman is a member from the wealthy, upper class assuming that he is well-mannered and respectable towards women. Class does not define him as a clean, intelligent and moralistic man. He is in actual fact, as the reader finds out in the poem, that he is cunning and acts in a perverted manner yet na�ve, this line is an indication of this immoral behaviour 'Were the child tied to me, d'ye think the child t'would do?' He is pretending to be kind and polite as he is urging to seduce her. This line suggests his playful nature, 'A gentleman in hunting rode astray.' Whereas the beggar woman is seen as a poor, lower class woman yet she is attractive, 'But her cheeks were fresh and linen clean.' She is also clever and cunning, like the gentleman, so her innocent appearance deceives the gentleman and the reader, as found out later in the poem. The man is very eager to seduce the woman, resembling the attitude of a predator, keen on his prey, 'He let his company the hare pursue, for he himself had other game in view.' ...read more.

At the end of the poem, it is ironic and humorous because the tables have turned, and the man's plan had failed so now he appears to look pathetic as she leaves him with a great responsibility, teaching him the moral that there is no pleasure without responsibility. 'But ere you get another, 'ten't amiss to try a year or two how you'll keep this,' this line is humorous suggesting from the word 'another' that the man may have other children so he must learn from this lesson that seducing women may be pleasurable but results in unpleasant consequences of many responsibilities. The beggar woman may feel hopeful in leaving her child with him as he may provide him wit a better life so it may not be a cold, unmotherly act after all. In the poem, 'Our Love now,' the man and woman have different attitudes to the situation. The poem is a balanced dialogue which is an antithesis. The overall structure of the poem is an antithesis, that is, the whole dialogue of each person is opposing each other. It is constructed of eight stanzas consisting of seven lines. It can be compared to a pair of 'weighing scales' because the man would express his optimistic feelings to her while she would express her pessimistic feelings to him, she would outweigh him. The man and woman both have different approaches towards the situation. ...read more.

The woman answers back with an implication of a slow pace of growth, suggesting it takes time to regain emotional strength so she feel reluctant to starting a new relationship with him. In the last stanza he admits that a great deal went wrong in their relationship, using the metaphor of forces of nature as he is suggesting that the scale of effects of a storm can have a great deal of physical impact and this is similar to the effects of a relationship which has a great deal of emotional impact. This is emphasised by the violent adjective 'raging' and the sense of hearing in the word 'listening,' this line suggests this, 'Listen to how the raging storm.' In the last stanza the man ends in a hopeful message, 'the breach in us can be mended' whereas she ends in a negative, final message, 'The tree is forever dead such is our love,' highlighted by 'Such is our love' without using the word 'now' unlike the endings of the other stanzas. This line suggests that their relationship has ended and there is no more love existing between them. She is reinforcing that the pain is so bad that she ends it in a morbid way by comparing it to death like the death of the trees which will no longer exist. At this point she seems quite irritated and annoyed that he wont realise the fact that there will not be any new fresh starts in their relationship. This line is a termination to his persistent beseeching. 1 ...read more.