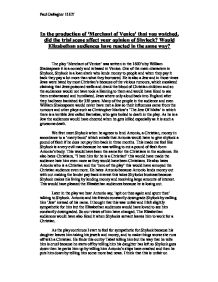 In the production of 'Merchant of Venice' that you watched, did the trial scene affect your opinion of Shylock? Would Elizabethan audiences have reacted in the same way?

In the production of 'Merchant of Venice' that you watched, did the trial scene affect your opinion of Shylock? Would Elizabethan audiences have reacted in the same way? The play 'Merchant of Venice' was written in the 1600's by William Shakespeare it is a comedy and is based in Venice. One of the main characters is Shylock, Shylock is a loan shark who lends money to people and when they pay it back they pay a lot more than what they borrowed. He is also a Jew and in those times Jews were hated by most Christian's because of the vicious rumours, which escalated claiming that Jews poisoned wells and drank the blood of Christian children and so the audiences would not have took a likening to them and would have liked to see them embarrassed and humiliated. Jews where only aloud back into England after they had been banished for 350 years. Many of the people in the audience and even William Shakespeare would never have met a Jew so their influences came from the rumours and other plays such as Christopher Marlow's 'The Jew Of Malta' in which there is a terrible Jew called Barnabas, who gets boiled to death in the play. ...read more.

This would have pleased the Elizabethan audiences because he is losing out. Later in the play we hear Antonio say, 'spit on thee again and spurn thee' talking to Shylock. Antonio and his friends constantly downgrade Shylock by calling him 'Jew' instead of his name. I thought that this was unfair and I felt slightly sympathetic for him but the Elizabethan audiences would have loved to see him constantly downgraded. So our views of him have changed. The Elizabethan audiences would have also liked it when Shylocks servant leaves him to work for a Christian. As the play continues I start to feel for sympathetic for Shylock because his daughter leaves him taking his jewels and money, and to make things worse she runs off with a Christian. He finds this out by Tabal telling him but the way that he tells him is cruel because he starts off by telling him his daughter has left so Shylock goes down then he perks him up by telling him Antonio's ships have crashed and then he puts him down by telling him some more bad news. ...read more.

I think that this is sadistic and evil and the Elizabethan audience would have felt the same. He also does not accept Antonio's pleas of mercy and is ready to cut Antonio until he finds out that he has to cut exactly one pound of Antonio's flesh and no shed on drop of blood. This is an impossible task and so he cannot and does not do it. He is then forced to change his religion and give everything. At this point I felt extremely sorry for him but the Elizabethan audiences would not have minded it they would have enjoyed it. In conclusion I don't like Shylock sometimes but other times I feel sorry for him. I feel sorry for him when he gets tricked out of all his possessions and everything took from him but don't like him when he is ready to kill Antonio in cold blood and does not care about his own flesh and blood. The Elizabethan audience would have hated him throughout the play and not liked him one bit. Their impression of him would have got worse as the play goes on as he announces that he hates Christians and as they see him ready to kill their hero, Antonio, in cold blood. Paul Gallagher 11HY ...read more.