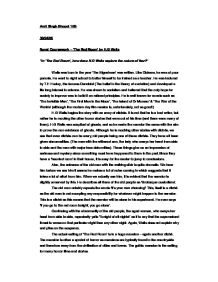 &quot;In 'The Red Room', how does H.G Wells explore the nature of fear?'

Amit Singh Bhopal 10B 30/04/06 Novel Coursework - 'The Red Room' by H.G Wells "In 'The Red Room', how does H.G Wells explore the nature of fear?' Wells was born in the year 'The Signalman' was written. Like Dickens, he was of poor parents. He went to night school to better himself to be trained as a teacher. He was lectured by T.H Huxley, the famous Darwinist (The belief in the theory of evolution) and developed a life long interest in science. He was drawn to socialism and believed that the only hope for society to improve was to build it on rational principles. He is well known for novels such as 'The Invisible Man', 'The First Men in the Moon', 'The Island of Dr Moreau' & 'The War of the Worlds' (although the modern day film version is, unfortunately, not as good!) H.G Wells begins the story with an array of clich�s. It is not that he is a bad writer, but rather he is mocking the other horror stories that were out at his time (and there were many of them). H.G Wells was sceptical of ghosts, and so he made the narrator the same with the aim to prove the non-existence of ghosts. Although he is mocking other stories with clich�s, we see that even clich�s can be scary; old people being one of these clich�s. ...read more.

This gives me the impression that the narrator is checking every corner to re-assure him. It seems that he is not looking for anything supernatural but someone hiding. This, again, builds on the theory that he is slightly unnerved. The narrator starts to light candles and then the fire to 'Keep down any disposition to shiver'. It seems that, being a rational man, he know the power of his mind. He does not want himself to shiver because of the cold. If he shivers because of the cold, he'll think that he is shivering because of fear. Also, he might not want to appear fearful to anything that might be watching him in the room. After he does that, he protects himself, by pulling a table up in front of him 'To form a kind of barricade before him'. He also lays his gun down on the table. Of course, again he is reassuring himself that he has a method of protecting himself even though these methods won't work against something supernatural. He is sort of helping himself as in doing these he is protecting himself from things that are tangible and real and therefore, he might not think that ghosts exist. However, being a rational and scientific man I do not believe that he would have bothered with these measures. I think the barricade and his gun are offering him some psychological protection. ...read more.

'He spoke to me no longer as one who greets an intruder. But one who grieves for a broken friend'. They probably feel sorry for him and what he has been through. In the beginning, they seemed sceptical and disapproving of what about to do. This could have been because the narrators fear had started earlier, since he chose to bring the gun, and it could have been nerves affecting him a lot earlier than we thought and therefore, his opinion on the old people may have been slightly biased. When asked about the room, the narrator replies that 'the room is haunted'. We take this in a literal sense and think that indeed, ghosts reside in the room. However, when he elaborates, we find out that he is not talking about anything supernatural, but fear. He describes it as being both 'Deafening and darkening'/ I note the'd' sound which was probably used to emphasize the overwhelming power of the mind. The old man seems to agree but what we must realise is that although they seem to be talking about the same thing, they are not. The old man personifies fear and it is shown by using a capital 'F'. He still thinks that there is something supernatural. I think it is fair to say that H.G Wells is making the general point about people wanting to cling to their primitive beliefs and not look at things rationally. He shows us that people are generally hard to change and that is the whole point to the story. ...read more.