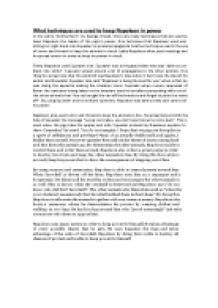 In the satire Animal farm by George Orwell, there are many techniques that are used to keep Napoleon the leader of the pigs in power.

﻿What techniques are used to keep Napoleon in power In the satire ?Animal farm? by George Orwell, there are many techniques that are used to keep Napoleon the leader of the pigs in power. One technique that Napoleon used was letting his right-hand man Squealer to spread propaganda. Another technique used is the use of terror and threats to keep the animals in check. Lastly Napoleon often used meetings and he spread rumors in order to keep his power in check. Firstly Napoleon used Squealer a lot. Squealer was a very good talker who was ?able to turn black into white?. Squealer spread around a lot of propaganda to the other animals. ...read more.

By using Squealer and his brilliant speeches, Napoleon was able to keep sole control of his power. Napoleon also used terror and threats to keep the animals in line. He spread around with the help of squealer the message ?surely comrades, you don?t want Jones to come back?. This is used when the pigs take the apples and milk, Squealer ordered by Napoleon explains to them Comrades!' he cried. 'You do not imagine, I hope, that we pigs are doing this in a spirit of selfishness and privilege? Many of us actually dislike milk and apples. I dislike them myself. However squealer then adds in the threat of Jones coming back and this shuts the animals up. ...read more.

Snowball!?. The other animals also blame him such as ?when the cows declared unanimously that Snowball milked them in their sleep?. By doing this Napoleon is able unite the animals together with one common enemy. Napoleon also hosts a ceremony where he demonstrates his powers by wearing clothes and walking on two legs. He has his dogs around him who ?growl menacingly? and take out anyone who dares to oppose him. Napoleon uses many tactics in order to keep power for himself. He takes advantage of every possible chance that he gets. He uses Squealer, the dogs and takes advantage of the exile of Snowball. Napoleon by doing this is able to destroy all chances of protest and is able to keep power for himself. ...read more.