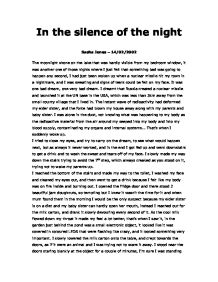 In the silence of the night

In the silence of the night Sasha Jones - 14/02/2002 The moonlight shone on the lake that was hardly visible from my bedroom window, it was another one of those nights where I just felt that something bad was going to happen any second, I had just been woken up when a nuclear missile hit my town in a nightmare, and I was sweating and signs of tears could be felt on my face. It was one bad dream, one very bad dream. I dreamt that Russia created a nuclear missile and launched it at the UN base in the USA, which was less than 3km away from the small county village that I lived in. The instant wave of radioactivity had deformed my elder sister, and the force had blown my house away along with my parents and baby sister. I was alone in the dust, not knowing what was happening to my body as the radioactive material from the air around my seeped into my body and into my blood supply, contaminating my organs and internal systems... That's when I suddenly woke up. I tried to close my eyes, and try to carry on the dream, to see what would happen next, but as always it never worked, and in the end I got fed up and went downstairs to get a drink and to wash the sweat and tears off of my face. I slowly made my way down the stairs trying to avoid the 7th step, which always creaked as you stood on it, trying not to wake my parents up. I reached the bottom of the stairs and made my way to the toilet, I washed my face and cleaned my eyes out, and then went to get a drink because I felt like my body was on fire inside and burning out. I opened the fridge door and there stood 2 beautiful jam doughnuts, so tempting but I knew it wasn't the time for it and when ...read more.

WALK!". When I reached the box I didn't dare open it, the lights were still flashing as I could see from the gaps in the opening, and I swiftly pushed it back, I decided to let it rest for today, and get on with the day gibing me some thinking time to make a decision on what to do. I stayed up that night, just thinking, I had been all day already, but it was the only thing on my mind, and however hard I tried to move it out of the way and start to think about something else, the worse it got, so I decided to take it in the face and make a decision. My choices where the following, either to give it up to the UN and hope for a reward, try to sell it off to a mate for a few bucks, or give it to dad and see what he thinks we should do with it. I decided to give it to dad, he was elder than me, and when he took it into his hands it was no longer my problem, and so he would have to sort out what to do with it, knowing dad he'll probably take it down to the local police station, but that's none of my worries, I just need to get it out of my possession and preferably out of my house. I knew that this night would be one of the worse nights ever, but I just lay there motionless, trying to sleep, in the silence of the night. "Hey get up! I told you already that we needed to leave early this morning, and look at you sleeping like a log! Get up! Come on, get dressed and go get ready to leave!" I couldn't believe me luck, I had such a quite night's sleep, no nightmares, no middle of the night crying, no sweating, it was such a good nights sleep that I even overslept holding back the whole family from starting the journey to my grandma's house. ...read more.

I looked behind us to see an explosion miles high, that's when I saw it! Exactly how it had appeared in my dream! I gigantic wave rushing towards us, I could see the houses and trees miles behind us getting sucked out of their foundations and roots, cars were flying and people were dying. As it approached us at lightning speed I didn't even have time to get my head down, the entire car was lifted into the air and we started spinning at tremendous speeds, I had to watch as my baby sister fell out of my mothers hands, my mother's face covered in tears! Screaming! Crying! All I could hear were tremendous wails and screams, I then made a jump for my mother to hold her but the car which was traveling at lightning speed now smashed into a house and I fell back on myself! Nails were stuck into me, and I was held back! I was watching my family die around me! My mother flew out of the car with a tremendous wail "NOOOOOOOOOOOOOOOO!!" and she was gone, I held on to the car for my life, but it was too much, the force pulled me back and I went flying away, I started to fall miles and miles towards the earth, I was reliving my dream, the only difference was that this time it was for real, my family had just been killed around me, brutally murdered in front of my very eyes, my whole life ran before me in my head as I fell, I twisted and turned and got battered and cracked, I felt how I had felt in the dream! I felt like I was being mutated being burnt alive, my skin melting before me, and my body changing into an abnormal shape! What was I becoming! These were my last thoughts... and with a final pain like a white-hot steak had been put through me, it all vanished, yes every single thought, I had drowned in my own feelings, I was heading to meat my family in the peaceful world, in the afterlife. ...read more.