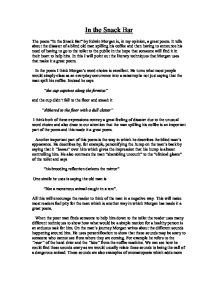 In the Snack Bar.

In the Snack Bar The poem "In the Snack Bar" by Edwin Morgan is, in my opinion, a great poem. It tells about the disaster of a blind old man spilling his coffee and then having to announce his need of having to go to the toilet to the public in the hope that someone will find it in their heart to help him. In this I will point out the literary techniques that Morgan uses that make it a great poem. In the poem I think Morgan's word choice is excellent. He turns what most people would simply class as an everyday occurrence into a catastrophe not just saying that the man spilt his coffee. Instead he says "the cup capsizes along the formica" and the cup didn't fall to the floor and smash it "slithered to the floor with a dull clatter" I think both of these expressions convey a great feeling of disaster due to the unusual word choice and also draw to our attention that the man spilling his coffee is an important part of the poem and this made it a great poem. ...read more.

On the man's journey Morgan writes about the different sounds happening around him. He uses personification to show that these sounds may be scary to someone who cannot see from where they are coming. For example he refers to the "roar" of the hand drier and the "hiss" from the coffee machine. We can see how he could find these sounds scary as we would usually relate these sounds to being the call of a dangerous animal. These sounds are also examples of onomatopoeia which adds more life and depth to the snack bar for the reader. All this, again, adds weight to the argument that this is a great poem. Morgan also puts the most important things about the man's action onto a line by itself for example "he stands" or "and speaks". This gives us the feeling that the fact that these were given a line to themselves they must be very important and quite an achievement considering the appearance of the man. ...read more.

It tells us how his live depends on a lot of people who would rather not be in contact with him. The last line is the rounding up of the whole poem. "Dear Christ, to be born for this!" This is the line that makes us ask ourselves, if we were in the same state as the man, would we really want to be alive. This, I thought was a fantastic way to end a poem as it could leave the reader thinking for a long time. This makes it a great poem. Overall I enjoyed this poem a lot. The first time I read it I thought the topic the poet had chosen was quite disgusting but on closer inspection I realised Morgan had brought up several important and meaningful issues. It also made me change my ways as before I read this poem I would not have been the one to stand up and help the man but I now feel that I could and if the situation arose I would. All of these techniques and issues all come together to create not just a good poem, but a great poem. ...read more.

There is some good analysis of the language choices used in this poem but there needs to be further exploration of the way structure and form is used to shape meaning in this poem.