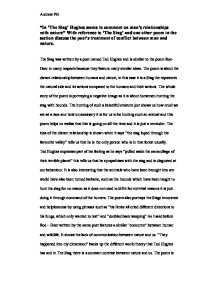 &quot;In 'The Stag' Hughes seems to comment on man's relationships with nature&quot; With reference to 'The Stag' and one other poem in the section discuss the poet's treatment of conflict between man and nature.

"In 'The Stag' Hughes seems to comment on man's relationships with nature" With reference to 'The Stag' and one other poem in the section discuss the poet's treatment of conflict between man and nature. The Stag was written by a poet named Ted Hughes and is similar to the poem Roe-Deer in many respects because they feature many similar ideas. The poem is about the distant relationship between humans and nature, in this case it is a Stag the represents the natural side and its actions compared to the humans and their actions. The whole story of the poem is portraying a negative image as it is about horsemen hunting the stag with hounds. The hunting of such a beautiful creature just shows us how cruel we are as a race and how unnecessary it is for us ...read more.

The poem also portrays the Stags innocence and helplessness by using phrases such as "his limbs all cried different directions to his lungs, which only wanted to rest" and "doubled back weeping" As I said before Roe - Deer written by the same poet features a similar 'encounter' between human and wildlife. It shows the lack of communication between nature and us. "They happened into my dimension" backs up the different world theory that Ted Hughes has and in The Stag there is a constant contrast between nature and us. The poem is about a person having an encounter with a Roe - Deer but because of us driving nature away it emphasis on how magical it is to see a wild animal. ...read more.

'Hearing the hound-pack smash the undergrowth, hearing the bell-note' creates and angry feeling towards the humans, then when he contrasts those actions to the Stags actions like "doubled back weeping and looking for home up a valley and down a valley" shows how the Stag is just minding its own business in its own world and we have come into its world to hunt it. The Roe - Deer on the other hand shows us the emptiness, which separates the two worlds, such as "snow lonely". Both of these poems warn us that we should think about our actions and helps us to understand more about the lack of communication between us and nature and how devastating it would be if we didn't change they way we act as it is pushing nature further and further away. Andrew Pitt ...read more.