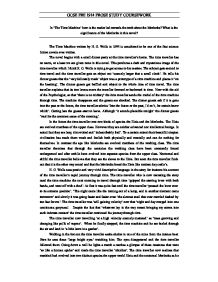 In 'The Time Machine' how is the reader led towards the truth about the Morlocks? What is the significance of the Morlocks in this novel?

In 'The Time Machine' how is the reader led towards the truth about the Morlocks? What is the significance of the Morlocks in this novel? The Time Machine written by H. G. Wells in 1895 is considered to be one of the first science fiction novels ever written. The novel begins with a small dinner party at the time traveller's home. The time traveller has no name, or a least we are given none in this novel. This produces a dark and mysterious image of the time traveller which I think H. G. Wells is trying to get across to his readers. The subject gets around to time travel and the time traveller gets an object out 'scarcely larger that a small clock'. He tells his dinner guests that the 'very delicately made' object was a prototype of a time machine and places it 'on the heartrug'. The dinner guests get baffled and object to the whole idea of time travel. The time traveller explains that its two levers move the traveller forward or backward in time. ...read more.

The time traveller gets a iron mace from this gallery and now is ready to confront the brutal and wild Morlocks. He goes down a well and a group of the Morlocks attack him . the time traveller lights a match and the Morlocks all retrieve. He sees a table laid with flesh seemingly ready to eat. After fighting off the Morlocks the time traveller notices that his initial assumptions were wrong,. The Morlocks breed the Elois. He thinks that the upper class had wealth and comfort and the poor had work and life. Without food the only choice for the Morlocks are the Elois. The time traveller theorizes that the utopian lifestyle of the Elois are only for the benefit of the Morlocks. Genre is like a group of a large item. It is like the branches of a particular tree. Science fiction is a genre of entertainment. A classic example is the Terminator. The terminator is about time travel and has many futuristic technology that we don't yet posses.. H. G. Wells is trying to warn the society through the 'Time Machine' that capitalism is destructive. H. G. Wells is also trying to say that the future is unpredicted and the instead of utopia , dystopia could happen. GCSE PRE 1914 PROSE STUDY COURSEWORK ...read more.