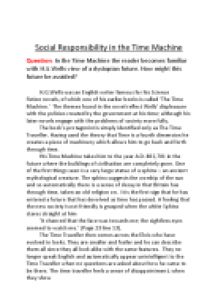 In the Time Machine the reader becomes familiar with H.G.Wells view of a dystopian future. How might this future be avoided?

﻿Social Responsibility in the Time Machine Question: In the Time Machine the reader becomes familiar with H.G.Wells view of a dystopian future. How might this future be avoided? H.G.Wells was an English writer famous for his Science fiction novels, of which one of his earlier books is called ?The Time Machine.? The themes found in the novel reflect Wells' displeasure with the policies created by the government at his time; although his later novels engage with the problems of society more fully. The book?s protagonist is simply identified only as The Time Traveller. Having used the theory that Time is a fourth dimension he creates a piece of machinery which allows him to go back and forth through time. His Time Machine takes him to the year A.D. 802,701 in the future where the buildings of civilisation are completely gone. One of the first things seen is a very large statue of a sphinx ? an ancient mythological creature. The sphinx suggests the worship of the sun and so automatically there is a sense of decay in that Britain has through time, taken an old religion on. ...read more.

Everything he observes, he tries to find a reason for why it has happened e.g. for the relatively small population of the Eloi and because the decayed large structures which have been deserted, he assumes that it was because before them they created a birth control to reduce any problems of overpopulation. He tries to find solutions in order to make the ?Utopia? reality. This relates to an important theme in the novel that there has been an automatic assumption that the human race will continue to improve in society; Wells has tried to warn the reader of trusting the social chain of command without thinking of the consequences of what could happen to the society in the future. The Time Traveller becomes intrigued when he first sees the ?ape-like creature? (page 43 line 2) running along. Wells was a Darwinist, since at the times Darwin?s theories were being accepted in the scientific community. H.G.Wells believed that as the social system would gradually change over thousands of years, so would the human biology. He cleverly inserted this theory into his book. The ape like creatures are called the ?Morlocks? which already shows the modification of the humans which is far more reflective than the ?Eloi?, a beautiful name for a beautiful race. ...read more.

The Earth is our habitat but also a habitat to millions of other species and so we must take care of it as much as possible. As we can see from the way H.G.Wells has described the different conditions of the Earth. All he can see is the deterioration of everything on Earth. So as the tenants to the Earth we have to take action and become greener in order to stop global warming. H.G.Wells has given us a main message in this novel. Wells argues that evolution is not necessarily leading mankind to Utopia but that our actions will back fire and will lead us to dystopia. He has shown that with the Elois and Morlocks that if the government carry on in their ways the upper class will not just become stupid and lazy but the slaves will rebel against them. Wells has tried to show us that there is still time and humans still have free will to change the course of their lives. We must change the system in which people have different status and levels but we must show that we are all equals and change governments to social systems that are not necessarily politically correct but morally correct. ...read more.