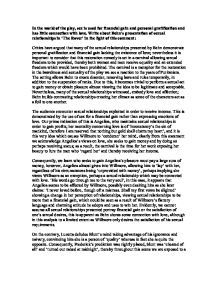 In the world of the play, sex is used for financial gain and personal gratification and has little connection with love. Write about Behn's presentation of sexual relationships in 'The Rover' in the light of this comment:

In the world of the play, sex is used for financial gain and personal gratification and has little connection with love. Write about Behn's presentation of sexual relationships in 'The Rover' in the light of this comment: Critics have argued that many of the sexual relationships presented by Behn demonstrate personal gratification and financial gain lacking the existence of love; nevertheless it is important to consider that this restoration comedy is set in a carnival allowing sexual freedom to be provided, thereby both women and men receive equality and an extended freedom which would have been prohibited. The carnival is a metaphor for the restoration in the bawdiness and sexuality of the play we see a reaction to the years of Puritanism. The setting allows Behn to create disorder, removing laws and rules temporarily, in addition to the suspension of ranks. Due to this, it becomes trivial to perform a sexual act to gain money or obtain pleasure almost viewing the idea to be legitimate and acceptable. Nevertheless, many of the sexual relationships witnessed, embody love and affection; Behn builds contrasting relationships creating her climax as some of the characters act as a foil to one another. The audience encounter sexual relationships exploited in order to receive income. This is demonstrated by the use of sex for a financial gain rather than expressing emotions of love. Our prime indication of this is Angelica, who maintains sexual relationships in order to gain profits; her mentality concerning love is of 'inconstancy's the ...read more.

Furthermore, Pedro wishes Florinda to marry Antonio as a result of his love for her, however Florinda asserts that she does not reciprocate such emotions towards Antonio, thereby implying that the feelings are one sided. Nonetheless, Antonio's love towards Florinda can be questioned as he sets to engage in a sexual relationship with Angelica, regardless of his marriage and commitment to Florinda, 'Name not those distant joys, there's not one thought of her will check my passion here', this statement by Antonio reveals the challenged extent of his love towards Florinda, as a result, his disloyalty portrayed imply that such a relationship has little connection with love, perhaps a criticism of arranged marriages. An alternative approach can be viewed through the relationship possessed between Florinda and Belvile. Although many obstacles face them, restricting their right to be together, they still fight for one another and for their love. This is demonstrated by Belvile's determination to be faithful remaining with Florinda, although he is challenged by Frederick: 'I dare swear I know a hundred as kind young and handsome as this Florinda and dogs eat me if they are not as troublesome to me i'th'morning as they were welcome over night'. However, although Belvile is exposed to such temptation he resists the inducement emphasising his loyalty towards Florinda, possibly acting as a foil to Antonio's response to temptation. Similarly, Florinda behaves in a comparable way towards Belvile, protesting her love for him against her brother and father by refusing to marry Don Vincentio or Antonio. ...read more.

An alternative explanation is that the financial gain or the pay is 'but of thy love' meaning the money is simply a symbol of love in a sexual relationship. Another interpretation implies love derives from a relationship accidentally without provoking deep emotional feelings during the initial stages of that relationship, for example although Willmore admires Hellena, his only intentions were to gain personal satisfaction this is evident from his keenness to sleep with Angelica at the same time fulfilling his cavalier figure. However, later on in the play, Willmore reveals his love for Hellena asserting a love connection in their sexual relationship. Thus, Behn attempts to communicate her possible beliefs concerning sexual relationships through the characters and their interactions with their sexual partners. The play suggests that a possible interpretation of Behn's opinion is whether the characters connection derives as a result of a financial gain or in attempt to silence their sexual needs, a love bond will penetrate through, although not in all cases as symbolised by Blunt and Lucetta. Furthermore, it is understood that society can not control sexual relationships, as proven by Hellena's rebelling nature and her thirst to gain experience and pleasure. In addition, Behn was very much an opponent of arranged or forced marriages, which is witnessed in this play as she pursues this theme by the presentation of a forced sexual relationship between Florinda and Antonia or Don Vincentio, which explicitly demonstrates the inexistence of love, a marriage primarily based on status. ...read more.