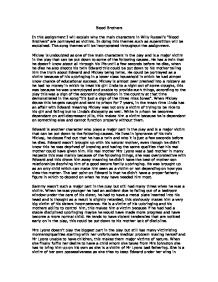 In this assignment I will explain why the main characters in Willy Russell's &quot;Blood Brothers&quot; are portrayed as victims. In doing this themes such as superstition will be explained. The song themes will be incorporated throughout the assignment.

Blood Brothers In this assignment I will explain why the main characters in Willy Russell's "Blood Brothers" are portrayed as victims. In doing this themes such as superstition will be explained. The song themes will be incorporated throughout the assignment. Mickey is undoubted as one of the main characters in the play and is a major victim in the play that can be put down to some of the following causes. He has a twin that he doesn't know about all through his life until a few seconds before he dies, when he dies he also shoots his twin Edward this could be put down to his mother telling him the truth about Edward and Mickey being twins. He could be portrayed as a victim because of his upbringing in a lower class household in which he had almost know chance of educational success. Mickey is almost peer preshed into a robbery as he had no money in which to treat his girl Linda to a night out of some cloughs, this was because he was unemployed and unable to provide such things, according to the play this was a sign of the economic depression in the country at that time demonstrated in the song "it's just a sign of the times miss Jones". When Mickey douse this he gets caught and sent to prison for 7 years, in the mean time Linda has an affair with Edward meaning Mickey was not only a victim of trying to be nice to his girl and failing but to Linda's disloyalty as well. While in prison he becomes dependant on anti-depressant pills, this makes him a victim because he is dependant on something else and cannot function properly without them. Edward is another character who plays a major part in the play and is a major victim that can be put down to the following causes. ...read more.

Crooks again chides them: "You guys is just kiddin' yourself" (83). But Candy and Lennie stubbornly assert that they have the money and that they're actually going to get a place. Crooks finally becomes convinced and, allured by the reality of the dream, asks for a share in it: "If you . . . . guys would want a hand to work for nothing-just his keep, why I'd come an' lend a hand" (84). Suddenly Curley's wife comes to the door, looking for Curley. Steinbeck has now assembled for us the outsiders of his cast of characters-the old cripple, the Negro, the idiot, and the woman-all of them gathered in Crooks' room while the men are out of town. Crooks and Candy act coldly toward her while Lennie stares, fascinated. Curley's wife knows that the others, including her husband, have gone to the brothel, and grows angry at the treatment she receives from the three remaining men. She indignantly confesses to being lonely up in the house all the time and to not liking Curley's company: "Spends all his time sayin' what he's gonna do to the guys he don't like, and he don't like nobody" (85). She asks what really happened to Curley's hand and when Candy stubbornly tells her that he got it caught in a machine, she grows angry again. Candy defends the three against her contempt and triumphantly announces that they are going to have a house of their own. Curley's wife scoffs at Candy's indignation and doubts what he says: "If you had two bits in the worl', why you'd be in gettin' two shots of corn with it and suckin' the bottom of the glass" (87). Candy controls his temper and orders Curley's wife to leave, telling her that she's not wanted. Before she leaves she notices the bruises on Lennie's face and realizes what really happened to Curley's hand. ...read more.

And indeed, the reader becomes curious as to their friendship as well. And can we call it friendship? Lennie would call George a friend, but George would perhaps be hard-pressed to admit the same of Lennie. As he tells Slim, he has simply become so used to having Lennie around that he "can't get rid of him" (45). Despite his annoyance, George also demonstrates protectiveness, patience, and pride when it comes to Lennie. He is perhaps motivated to stay with Lennie by a sense of guilt, or responsibility, or pity, or a desire to not be alone himself. Most likely it is a combination of all of these motivations. Yet it seems strange that George would choose to remain with Lennie, given the danger that Lennie causes for the both of them. George is not blind to the fact that life would be easier without Lennie, and he often yearns for independence when Lennie becomes troublesome, creating a major source of tension in the novel. This tension is not resolved until the final gunshot by the riverside, when the strain of Lennie's company makes it impossible for George to survive with his companion. By killing Lennie, George eliminates a monumental burden and a threat to his own life (Lennie, of course, never threatened George directly, but his actions endangered the life of George, who took responsibility for him). The tragedy is that George, in effect, is forced to shoot both his companion, who made him different from the other lonely workers, as well as his own dream and admit that it has gone hopelessly awry. His new burden is now hopelessness and loneliness, the life of the homeless ranch worker. Slim's comfort at the end ("You hadda George" (118)) indicates the sad truth that one has to surrender one's dreams in order to survive, not the easiest thing to do in America, the Land of Promise. ...read more.