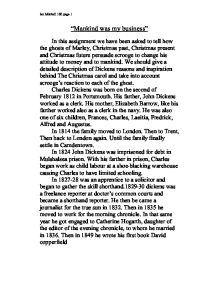 In this assignment we have been asked to tell how the ghosts of Marley, Christmas past, Christmas present and Christmas future persuade scrooge to change his attitude to money and to mankind.

"Mankind was my business" In this assignment we have been asked to tell how the ghosts of Marley, Christmas past, Christmas present and Christmas future persuade scrooge to change his attitude to money and to mankind. We should give a detailed description of Dickens reasons and inspiration behind The Christmas carol and take into account scrooge's reaction to each of the ghost. Charles Dickens was born on the second of February 1812 in Portsmouth. His farther, John Dickens worked as a clerk. His mother, Elizabeth Barrow, like his farther worked also as a clerk in the navy. He was also one of six children, Frances, Charles, Laeitia, Fredrick, Alfred and Augustus. In 1814 the family moved to London. Then to Trent, Then back to London again. Until the family finally settle in Camdentown. In 1824 John Dickens was imprisoned for debt in Mulshalsea prison. With his farther in prison, Charles began work as child labour at a shoe-blacking warehouse causing Charles to have limited schooling. In 1827-28 was an apprentice to a solicitor and began to gather the skill shorthand.1829-30 dickens was a freelance reporter at doctor's common courts and became a shorthand reporter. He then be came a journalist for the true sun in 1832. Then in 1835 he moved to work for the morning chronicle. ...read more.

These spirits would show him the error of his ways. The first spirit is Christmas past. This spirit shows him his past again. The things he enjoyed as a young boy and his desisons he made that affected his current life. The next spirit is Christmas present. He shows scrooge what is currently happening in the people close to him and shows him what he is missing out on. The final spirit is Christmas future. He shows scrooge what will happen in his future if he doesn't change his ways and that he will die a lonely old man. Scrooge then accepts the advice given by the spirits and generally becomes the ideal human often giving to charity and folks worse off than him. The first stave in the novello is when his former partner Marley visits scrooge. Right form the very beginning it is made clear Marley is dead. The first words on page one are "Marley was dead to begin with" "Scrooge new he was dead" as he signed for the register of his death. So when Marley appears to him his being there traumatizes him. Marley warns scrooge of the spiritual after life. He explains that man must share his humanity with others if he is not t be condemned to an after life. ...read more.

The ghost fades away. Stave five is the final stave in the novello. It is when scrooge realises that he can alter his ways. "The time before him was his own, to make amends in..." scrooge now seeks not to be a good businessman but to be a good man. "Glowing with his good intentions... sobbing violently..." yet even though scrooge has changed his way of life completely for the benefit of others. He is still happy with the new life he leads. "I am as a feather... I am as happy as an angel; I am as merry as a schoolboy... I am as giddy as a drunken man." After scrooges complete change, the church bells ring out to celebrate Christmas morning and scrooge's rebirth was on the birthday of Christ. Scrooge is completely changed: well-dressed and wearing a "delighted smile." Scrooge rejoices in humanity: he enjoys the company of people and attending church. Now Scrooge visits Fred and accepts his invitation to Christmas lunch. Scrooge tells Bob Cratchit that he will raise his salary. Scrooge will become a "second farther" to tiny Tim. The transformation is complete. Scrooge has be come " as good a friend, as good a master, as good a man as the good old city knew..." Ian Mitchell 10E page 1 ...read more.