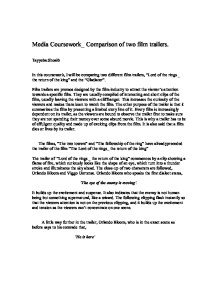 In this coursework, I will be comparing two different film trailers, &quot;Lord of the rings _ the return of the king&quot; and the &quot;Gladiator&quot;.

Media Coursework_ Comparison of two film trailers. Tayyeba Shoaib In this coursework, I will be comparing two different film trailers, "Lord of the rings _ the return of the king" and the "Gladiator". Film trailers are promos designed by the film industry to attract the viewer's attention towards a specific film. They are usually compiled of interesting and short clips of the film, usually leaving the viewers with a cliffhanger. This increases the curiosity of the viewers and makes them keen to watch the film. The other purpose of the trailer is that it summarizes the film by presenting a limited story line of it. Every film is increasingly dependent on its trailer, as the viewers are bound to observe the trailer first to make sure they are not spending their money over some absurd movie. This is why a trailer has to be of effulgent quality and made up of exciting clips from the film. It is also said that a film dies or lives by its trailer. The films, "The two towers" and "The fellowship of the ring" have alreadypreceded the trailer of the film "The Lord of the rings_ the return of the king" The trailer of "Lord of the rings _ the return of the king" commences by a clip showing a flame of fire, which curiously looks like the shape of an eye, which turn into a thunder stroke and illuminates the sky ahead. The close-up of two characters are followed, Orlando Bloom and Viggo Uortense. ...read more.

The film trailer "Gladiator" opens with a close-up shot of 'Universal' logo. This immediately gives the viewers confidence to watch the film as the universal is a highly recognizable name of film industry. The next caption is of 'Dream works', which again is reputable name of film industry and even in the initiative stage of the trailer persuades viewers to watch the film. The following clip consists of a plain, black background with upper case with a caption stating "The general ". This instantly gives high expectations for the character of the film. The sound of drumbeat is also building up in the background. This creates a sense of power and defiance. The following shot introduces us to the main character "Maximums". We are given an impression that he is a powerful, strong and respected person, as we see him walking proudly away from the camera. The next clip states, 'Who became a slave' By reading the word slave we think of poverty and lack of independence. Correspondently, the next shot reveals his new position working as a slave. The next shot is set in a coliseum, Maximums is shown walking away from the camera, which is behind him. It increases the tension and curiosity dramatically, as we see him walking fearlessly into the arena, obvious to his surroundings. The intensity of the crowd is shown as the camera moves from the mid to long shot. The following caption states, 'Who became a Gladiator', This reveals his reinstated position; he has finally fought his way out the poverty and is steadily working his way toward the top. ...read more.