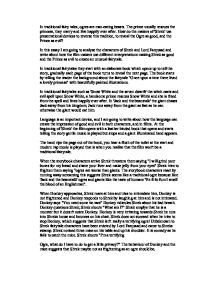 In this essay I am going to analyse the characters of Shrek and Lord Farquaad and write about how the film makers use different interpretations making Shrek as good and the Prince as evil to create an unusual fairytale.

In traditional fairy tales, ogres are man-eating beasts. The prince usually rescues the princess, they marry and live happily ever after. How do the makers of 'Shrek' use presentational devices to reverse this tradition, to reveal the Ogre as good, and the Prince as evil? In this essay I am going to analyse the characters of Shrek and Lord Farquaad and write about how the film makers use different interpretations making Shrek as good and the Prince as evil to create an unusual fairytale. In traditional fairytales they start with an elaborate book which opens up to tell the story, gradually each page of the book turns to reveal the next page. The book starts by telling the reader the background about the fairytale "Once upon a time there lived a lovely princess" with beautifully painted illustrations. In traditional fairytales such as 'Snow White and the seven dwarfs' the witch casts and evil spell upon Snow White, a handsome prince rescues Snow White and she is freed from the spell and lives happily ever after. In 'Jack and the beanstalk' the giant chases Jack away from his kingdom; Jack runs away from the giant as fast as he can otherwise the giant would eat him. Language is an important device, and I am going to write about how the language can create the impression of good and evil in both characters, and in films. At the beginning of 'Shrek' the film opens with a leather binded book that opens and starts telling the story gentle music is played but stops and a giant illuminated hand appears. ...read more.

He is also selfish the only reason he wants to marry Princess Fiona is because he would like to be king and have the perfect kingdom. He doesn't understand that beauty is skin-deep and is rude to Princess Fiona when he sees her turn into an ogre after sunset he doesn't want anything to do with her. In this film we quickly learn that the prince is not like a traditional fairytale character because Princes are kind and treat women in a kind way. Lord Farquaad is ready to marry Princess Fiona until he sees that when the sun sets she is turned into an ogre by a spell that was cast upon her when she was a child. Lord Farquaad calls off the wedding but he still proclaims himself as king he is deceptive because he should only become king if he loves Princess Fiona. It is clear that Lord Farquaad does not love the Princess but agrees to marriage because he wants to have the perfect kingdom. When a director is making a film it is important that he/she uses a variety of camera angles to create certain effects. At the beginning of the film, Shrek scares the storybook characters away there is a close up shot of his mouth to give the impression that he is going to eat them because saliva also flies out of his mouth. Close up shots are also useful for focusing the viewers attention on the characters emotions. Both Princess Fiona and Shrek can reveal their true happiness throughout close ups of them smiling. ...read more.

Shreks relationship with Donkey is a good one because Donkey gives advice to Shrek when he is having difficulties then decided how to deal with problems. Donkey makes us believe that Shrek is not a typical man-eating ogre by when he returns from finding flowers Shrek and Princess are smiling at each other and says "My, isn't this romantic". Shrek is just a really a gentle giant that does not want to kill people to end problems because he does not think it will solve anything. After analysing the characters of Shrek and Lord Farquaad, I have come to the conclusion that although Shrek seems like a traditional ogre he is not. Shrek has the Donkey and other friends, he rescues Princess Fiona, which is really a knights job and finds true love by marrying Princess Fiona. Although Lord Farquaad looks like a lord, his actions suggest that he is evil. He tortured the gingerbread man, he stole Shreks swamp, he made the knights fight Shrek, rejected the princess when he found out after sunset she becomes an ogre but he still wanted to become king. He is an extremely lazy and selfish person. The story of Shrek uses presentational devices to reverse our expectations this makes a good film not just because of the devices that the film makers use to influence the viewers. The viewer feels that Shrek is a far nicer character than Lord Farquaad even though by glance does not look like he is. Lord Farquaad looks important but is a bitter, twisted evil person. ...read more.