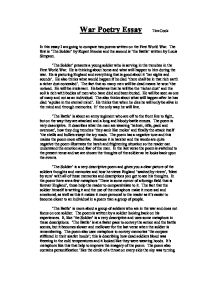 In this essay I am going to compare two poems written on the First World War. The first is 'The Soldier' by Rupert Brooke and the second is 'the Battle' written by Louis Simpson.

War Poetry Essay Tim Cook In this essay I am going to compare two poems written on the First World War. The first is 'The Soldier' by Rupert Brooke and the second is 'the Battle' written by Louis Simpson. 'The Soldier' presents a young soldier who is serving in the trenches in the First World War. He is thinking about home and what will happen to him during the war. He is picturing England and everything that is good about it 'her sights and sounds'. He also thinks what would happen if he died 'there shall be in that rich earth a richer dust concealed'. The fact that so many men will be dead means he won't be noticed. He will be irrelevant. He believes that he will be the 'richer dust' and the soil is rich with bodies of men who have died and been buried. He will be seen as one of many and not as an individual. ...read more.

'The Soldier' is a very descriptive poem and gives you a clear picture of the soldiers thoughts and memories and how he views England 'washed by rivers', 'blest by suns' with all of these memories and descriptions you get to see his thoughts. In the poem there are a few metaphors 'There is some corner of a foreign field that is forever England', these help the reader to compare/relate to it. The fact that the soldier himself is writing it and the use of the metaphors make it more sad and emotional, as well as this it makes it more personal to the reader as it's easier to become closer to an individual in a poem than a group of people. 'The Battle' is more about a group of soldiers who are in the war and does not focus on one soldier. The poem is written by a soldier looking back on his experiences. ...read more.

It contains long lines that have 10 syllables each. This makes the poem slower and sadder. It is written in letterform, as if the man was writing home because of this the poem is slower and calmer than 'The Battle'. 'The Battle' is a more traditional poem with four verses, each with four lines. As in 'The Soldier' each line has 10 syllables. This structure makes the poem slightly faster paced than 'The Soldier' does. Both poems have definite rhyme schemes. 'The Battle' has more of a rhythm than 'The Soldier' because of its structure but neither has a real definitive rhythm. 'The Soldier' is the sadder and more emotive of the two poems and through the use of descriptive literary techniques such as metaphors, similes and personification, has more enhanced imagery than 'The Battle'. I prefer 'The Soldier' because it is a very descriptive poem and contains a good use of imagery. I think that this makes it more effective than 'The Battle'. I also like the way the added emotion causes the reader to sympathise and relate to the soldier. By Tim Cook ...read more.