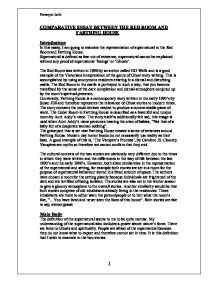 In this essay, I am going to examine the representation of supernatural in the Red Room and Farthing House.

COMPARATIVE ESSAY BETWEEN THE RED ROOM AND FARTHING HOUSE Introduction In this essay, I am going to examine the representation of supernatural in the Red Room and Farthing House. Supernatural is defined as fear out of existence, supernatural cannot be explained without any proof of supernatural 'Beings' or 'Ghosts'. The Red Room was written in 1896 by an author called HG Wells and is a good example of the Victorians interpretation of the genre of Ghost story writing. This is accomplished by using anonymous residents existing in a dismal and disturbing castle. The Red Room in the castle is portrayed in such a way, that you become transfixed by the sense of the dark complexion and dismal atmosphere conjured up by the room's spiritual presence. Conversely, Farthing House is a contemporary story written in the early 1990's by Susan Hill and therefore represents the relevance of Ghost stories to modern times. The story contains the usual devices needed to produce a commendable piece of work. The Cedar Room in Farthing House is described as a beautiful and unique room by Aunt Addy's niece. The story itself is additionally felt sad, this image is used when Aunt Addy's niece presumes hearing the cries of babies, "Not that of a baby but of a desperate woman sobbing". The graveyard that is set near Farthing House creates a sense of eerieness around Farthing House. ...read more.

Isolation is created when there is solitary pitch-blackness, there is no one to accompany you and so you feel frightened. The language of the story is typical of the late 1800's. There are many words that are not used today and this creates the sense that the language is archaic. For example, "Custodians", is a word that means caretakers. "Subterranean", means underground. These words give a sense of curiosity and danger because we wonder what these words signify. Therefore, the language is evidently complicated. Words like, 'black', suggest that the Red Room must be a dismal and eerie place, so it must refer to darkness. Much of the language is also poetic. Wells uses poetic prose because he wants to let the reader know what the character feels once entered in the Red Room. "For the moonlight coming in by the great window no the grand staircase..." this image tells us the beauty and complexion of the moon. Well also applies similes into his writing. "There was no mistake about it. The flame vanished, as if the wicks had been suddenly nipped between a finger and thumb". Farthing House on the other hand has a different plot. It starts with aunt Addy's niece who visits her in Farthing House. The residential home has a room called the Cedar Room and Aunt Addy's niece was told to stay in for one night because that was the only room available. ...read more.

She is trying to tell us that you can challenge your own fears if you put your mind to it. You don't have to be scared for eternity. Hill's moral is, Ghosts still exist even though we think they have vanished. Ghosts represent the supernatural in the two stories, however, they are very differently represented. For example, the supernatural represented in the Red Room refers to candles mounting on walls in little patterns and their flames flickering on and off. Farthing House's representation of supernatural is the crying of babies and women who don't exist. This refers to more of Ghosts because you can actually feel and visually see the babies and women. I think the representation of supernatural in the Red Room is more successful than that of Farthing House because we can actually imagine realistically what would happen in a situation like that of Farthing House. You wouldn't really expect the lights to suddenly flicker on an off without some kind of warning. But with babies crying and women sobbing, you can just picture it in your head and say you have seen Ghosts. So, for this reason I would prefer the Red Room. The language and imagery is also very realistic because this creates danger and suspense for the characters with anonymous names. I feel Ghost stories are still relevant to a twenty first-century audience because people want pleasure and entertainment in hearing frightening stories because they don't know what to expect. They want to relive the feeling of being scared. Paramjot Jutla 1 1 ...read more.