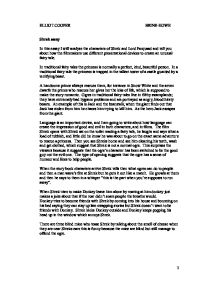 In this essay I will analyse the characters of Shrek and Lord Farquaad and tell you about how the filmmakers use different presentational devices to create an unusual fairy tale.

ELLIOT COOPER BRINE-HOWE Shrek essay In this essay I will analyse the characters of Shrek and Lord Farquaad and tell you about how the filmmakers use different presentational devices to create an unusual fairy tale. In traditional fairy tales the princess is normally a perfect, kind, beautiful person. In a traditional fairy tale the princess is trapped in the tallest tower of a castle guarded by a terrifying beast. A handsome prince always rescues them, for instance in Snow White and the seven dwarfs the prince who rescues her gives her the kiss of life, which is supposed to make the story romantic. Ogres in traditional fairy tales live in filthy swamplands; they have extremely bad hygiene problems and are portrayed as angry, bloodthirsty beasts. An example of this is Jack and the beanstalk, when the giant finds out that Jack has stolen from him he chases him trying to kill him. As the hero Jack escapes from the giant. Language is an important device, and I am going to write about how language can create the impression of good and evil in both characters, and in films. The film Shrek opens with Shrek sat on the toilet reading a fairy tale, he laughs and says what a load of rubbish, and little did he know he was about to go on the exact same adventure to rescue a princess. ...read more.

This shot has created a feeling of fear for the audience. Close up shots are also useful for focusing the viewers attention on the characters' emotions for example when Princess Fiona and Shrek are smiling it shows emotion and romance. ELLIOT COOPER BRINE HOWE Tension is created when Lord Faquaad is introduced. Instead of focusing on his face, the camera shows that he is very small and insignificant making you laugh at him. This is achieved on screen by the camera starting at his feet and then rises up showing the perspective of height with the background. When Shrek visits Lord Farquaad's castle the camera angle moves from ground level upwards to reveal the tower. This is called a high angle shot. It is useful because it makes Lord Farquaad seem large, and Shrek and Donkey appear small. Low angle shots are effectively used because they show Lord Farquaad looking down on Shrek and Donkey. Mid angle shots are used when Shrek and Donkey are relaxing together, and when Shrek has cooked Princess Fiona a meal. These shots show both of the characters at the same time and have the effect of showing the comparison between Shrek and Fiona. ...read more.

Most ogres don't rescue princesses and then fall in love with them leading to get married. Shrek has friends which traditional ogres don't which proves he is not a traditional fairy tale ogre. ELLIOT COOPER BRINE HOWE Although Lord Farquaad looks like a lord, his actions suggest that he is evil because he starts off by stealing Shreks swamp to put a lot of fairy tale creatures in. He makes the knights fight Shrek when he comes to Duloc to ask for his swamp back civilly. He rejects the princess when he finds out she turns into an ogre at night time and then proclaims that he is king even though he needs to marry a princess to achieve that. The story of shrek uses presentational devices to reverse our expectations, so that by the time the end of the film you can tell that the roles of Shrek and Lord Farquaad have been swapped from a traditional fairy tale because Shrek is the good guy when he should be the evil one. Lord Farquaad acts nothing like a lord because if he wanted to marry a princess he should have had to rescue her himself like most lords would in traditional fairy tales. Perhaps the message of the story is that you can't judge a book by its cover. 1 ...read more.