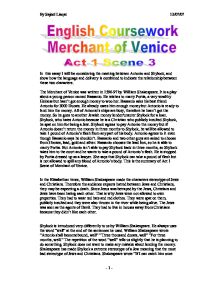 In this essay I will be considering the meeting between Antonio and Shylock, and show how the language and delivery is combined to indicate the relationship between these two characters.

In this essay I will be considering the meeting between Antonio and Shylock, and show how the language and delivery is combined to indicate the relationship between these two characters. The Merchant of Venice was written in 1596-97 by William Shakespeare. It is a play about a young person named Bassanio. He wishes to marry Portia, a very wealthy Heiness but hasn't got enough money to woo her. Bassanio asks his best friend Antonio for 3000 Ducats. He already owes him enough money but Antonio is ready to lend him the money. All of Antonio's ships are busy, therefore he hasn't got the money. So he goes to another Jewish money lender/unsurer Shylock for a loan. Shylock, who hates Antonio because he is a Christian who publicly insulted Shylock, he spat on him for being a Jew. Shylock agrees to pay Antonio the money but if Antonio doesn't return the money in three months to Shylock, he will be allowed to take 1 pound of Antonio's flesh from any part of his body. Antonio agrees to it even though Bassanio says he shouldn't. Bassanio and two other guys are asked to choose from 3 boxes, lead, gold and silver. ...read more.

What of that? Tubal, a wealthy Hebrew of my tribe, will furnish me. But soft, how many months Do you desire? (to Antonio) Rest you fair, good signor! Your worship was the last man in our mouths." Shylock is very angry, showing us that he doesn't like Antonio in an ironic way. In the lines 56-60 Antonio says "Shylock, albeit I neither lend nor borrow By taking nor by giving of excess, Yet to supply the ripe wants of my friend I'll break a custom. (To Bassanio) Is he yet possess'd How much ye would?" These lines tell us that Shylock hates Antonio because he neither lends or borrows money but Antonio is still willing to make exception for his friend Bassanio where he says "I'll break a custom." Which shows us how nice and caring friend Antonio is. However Antonio is not aware, being na�ve of Shylock's scheme and both are hagoling over the terms and conditions. This causes crisis building between the two characters, and tension for the audience of what Shylock is upto. Shakespeare makes the audience feel sympathy for Shylock as he wrote "Signor Antonio, many a time and off In the Rialto you have rated me About my monies and my usances still have I borne It with a patient shrug For suff'rance is the badge of all our tribe. ...read more.

So audience is ready for the Christian's death as Shylock is going to do, mostly taking a pound of flesh. In Act 1 Scene 3, the relationship between Christians and Jews is much on the hatred side. Jews wasn't treated as they wanted to by the Christians. In those times, Jews couldn't do anything physically to the Christians after being publicly insulted by them but all they could do was suffer. That is why they had to find a way to take revenge and Shylock has find a very good way to take revenge by trapping him in this trouble. Jews had no consequence in the society in front of the Christians that is why Christians wasn't brought to the court. In the modern times, people wouldn't favour the religions and you will be taken to court for committing a crime and doesn't matter whether you are Christian or not unlike in the Elizabethan times. So overall William Shakespeare was winding up the relationship between Jews and Christians. So he was successful on what he was aiming for. ?? ?? ?? ?? By Sajeel Liaqat 13/07/07 - 1 - ...read more.