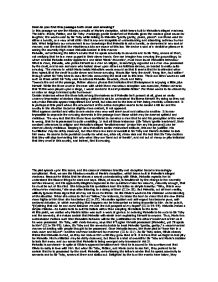 In this passage we see the hilarious results of Maria's deception, which bears fruit in Malvolio's alleged madness. The trio's -Maria, Fabian, and Sir Toby- mockingly

How do you find this passage both cruel and amusing? In this passage we see the hilarious results of Maria's deception, which bears fruit in Malvolio's alleged madness. The trio's -Maria, Fabian, and Sir Toby- mockingly gentle treatment of Malvolio gives the readers great cause for laughter; the words used by Sir Toby while talking to Malvolio-"gently gently, peace, peace"- are those used for either a lunatic, or a very small child- that is any one incapable of understanding and absorbing ordinary human talk. What heightens our amusement is our knowledge that Malvolio is not a lunatic, or demented in any sort of manner, and the fact that the mischievous trio are aware of this too. We derive a sort of a vindictive pleasure in seeing the normally high-nosed Malvolio treated in this manner. Malvolio, remembering the letter's advice that he speak scornfully to servants and to Sir Toby, sneers at them, not realizing that he is a mere puppet in their clever hands. One can imagine how amusing the groundlings, to whom at least Malvolio earlier appeared a one sided 'black' character', must have found Malvolio's behaviour. ...read more.

The very fact that the three have combined to convince a man that he and his perception of the world is wrong, that he is possessed is quite unsettling. In fact all those instances- (Sir Toby's 'gentle treatment', their constant references to religion and Malvolio's alleged 'bewitchedness' (make him say his prayers)) can be deemed utterly malicious. Keeping in view Malvolio's earlier malevolent attitude, this can be justified. His humiliation may be richly deserved, but then there is a kind of overkill in Sir Toby and Maria's decision to lock him away. He seems to be punished cruelly for what are, after all, minor sins and the fact that Sir Toby decides that they will stop tormenting him only when they are 'tired out of breath', and not out of mercy or pity indicated that they revel in this cruelty, and indeed, find it amusing. The plot speeds up in this scene, and the cases of mistaken identity and deception become increasingly complicated. First, we see the hilarious results of Maria's deception, which bears fruit in Malvolio's alleged madness. ...read more.

Once Malvolio leaves, the three plot to "have him in a dark room and bound"-another common treatment for madmen (III.iv.121). As Sir Toby notes, Olivia already thinks that Malvolio is mad, so they can torture him until they grow tired of it. It is here that we begin to feel pity for Malvolio. His humiliation may be richly deserved, but there is a kind of overkill in Sir Toby and Maria's decision to lock him away. and our sense that Malvolio is being wronged only increases in Act IV. Malvolio is convinced-in spite of Olivia's apparent bewilderment-that he is correct in his surmises and that Olivia is really in love with him. But when Sir Toby, Fabian, and Maria come to see him, they pretend to be certain that he is possessed by the devil. Malvolio, remembering the letter's advice that he speak scornfully to servants and to Sir Toby, sneers at them and stalks out. Delighted by the turn the events have taken, they decide together to lock Malvolio into a dark room-a frequent treatment for people thought to be possessed by devils or madmen. Sir Toby realizes that since Olivia already thinks Malvolio is crazy, he can do whatever he wants to the unfortunate steward. ...read more.