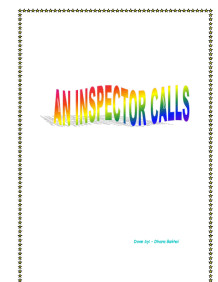 IN THIS PLAY, WHAT IS PRIESTLEY TRYING TO SAY ABOUT SOCIAL RESPONSIBILITY&quot;

Done by: - Dhara Bakhai "IN THIS PLAY, WHAT IS PRIESTLEY TRYING TO SAY ABOUT SOCIAL RESPONSIBILITY" An inspector call is a play written by JB Priestly in 1945. Although the play is written in 1945, it is originally set in 1912 to illustrate the audience a more dramatic look at the relationship between the wealthy and the poor. It also allows Mr Birling's predictions to fail. The play shows an impressive contrast of the younger and older generations. The play is based on various themes such as pride and status. For example, Mr and Mrs Birling think that people like Eva Smith are cheap labour and working class. The main themes of the play are society and community. JB Priestly, a socialist, believed that we are a community and have a responsibility to look after each other. On the other hand, Mr Birling is a capitalist, who believes that a man should only look after himself and his family. The play shows a gap between the young generations and the old generations. In the older generation, we have Mr and Mrs Birling who are refusing to accept their responsibility and their mistakes and instead are trying to justify themselves. In contrast, we have the younger generations like Sheila and Eric who have accepted their mistakes and are willing to take the responsibility. The play was set in 1912, which was just before World War I when there was a vast status difference in society. ...read more.

The inspector lacks respect for people like Mr and Mrs Birling. He compares them to criminals and does not want to judge them by their status - "often if it was left on me, I wouldn't know where to draw the line". The inspector talks to them straight without any hesitations of whom they are. He does not respect Mr and Mrs Birling bearing in mind that they are respectable in the town, but instead he talks to them very ruthlessly. - "possibly, but if you're easy with me, I'm easy with you". The inspector is against the difference between the upper class and the working class. "Your daughter isn't leaving in moon. She's here in Bromley too". Here is he trying to make the point that she is leaving in the same place as everyone else. He is trying to say that she is leaving in the same place where Eva Smith once lived. The inspector hates the fact that Mr and Mrs Birling are always regretting the facts and tells them straight on their face without any hesitations. - "I think you did something terribly wrong - and that you're going to spend the rest of your life regretting it." The inspector also understands the nation's responsibility thoroughly. - "but each one of you helped to kill her". Throughout the play the inspector is trying to give Priestley's message that people should not be judged or treated by their status. In the play, there is a huge difference between the young and the old generations. ...read more.

He is targeting the play to those people who think like Mr Birling who see people like Eva smith as cheap labour and working class. Priestly is also targeting people who use their power for wrong reasons such as Mr Birling, Sheila and Gerald. Priestly has not made the play sound like a lecture, which keeps a reader's attention. Priestly uses the technique of slowly revealing, the truth of each person one by one which makes the play fascinating to read. Priestly has avoided just moralising or lecturing us in the play instead, he has left us to understand our individual responsibility towards the society by reading the play. The message of the play is very clear even though it is said indirectly. This is because the play is written in a form where everyone who reads the play can put themselves in the shoes of the character for different reasons. The tone of the play changes between the start and the end. In the beginning of the play, the atmosphere was joyful as the family was celebrating for Sheila and Gerald's engagement. All the members in the family are happy and enjoying themselves. Everything changes when the inspector arrives. The inspector brings in bad news, which changes the atmosphere. As the inspector starts, questioning the truth slowly starts revealing and the atmosphere goes from bad to worst. To show the difference in the atmosphere the lights on the stage may have changed from soft light in the beginning to sharp lights towards the end. Ask sir which part of the conclusion to add this section in ...read more.