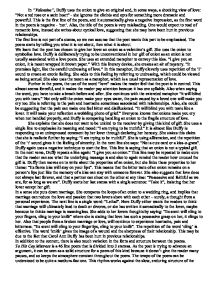 In &quot;Valentine&quot;, Duffy uses the onion to give an original and, in some ways, a shocking view of love: &quot;Not a red rose or a satin heart&quot; - she ignores the clichs and opts for something more dramatic and powerful.

In "Valentine", Duffy uses the onion to give an original and, in some ways, a shocking view of love: "Not a red rose or a satin heart" - she ignores the clich�s and opts for something more dramatic and powerful. This is the first line of the poem, and it automatically gives a negative impression, as the first word in the poem is negative - 'not'. Also, the title of the poem is very misleading. One would expect to read of romantic love, instead she writes about cynical love, suggesting that she may have been hurt in previous relationships. The first line is not part of a stanza, so we can assume that the poet wants this part to be emphasised. The poem starts by telling you what it is not about, then what it is about. We learn that the poet has chosen to give her lover an onion as a valentine's gift. She uses the onion to symbolise love. Duffy is deliberately trying to be unconventional in her gift of onion as an onion is not usually associated with a love poem. She uses an extended metaphor to convey this idea. "I give you an onion, it is moon wrapped in brown paper." With this literary device, she creates an air of mystery. "It promises light, like the careful undressing of love." In this metaphor, Duffy cleverly uses repetition of the 'I' sound to create an exotic feeling. She adds to this feeling by referring to undressing, which could be viewed as being sexual. ...read more.

On the contrary, Valentine is a poem which has a mere 23 lines and no stanzas. This is because free verse lyric is used instead, where Duffy uses a series of observations and then links them throughout the poem by their common theme. Also, Duffy doesn't write in sentence forms throughout - she uses disjointed phrases or even a single word. So the poem does not have a regular form and the lines and stanzas are of irregular length. Here, Duffy could be suggesting that love cannot be 'ordered' and 'regular'. It also infers to the reader that Duffy's thoughts are going directly onto the paper, which gives the poem a certain kind of urgency. It can also be a very simple reason - that she doesn't want give in to another stereotype of writing a traditional poem which rhymes and is very regular. Free verse lyric therefore gives this poem a reasonably fragile structure compared to the solid stanzas of To His Coy Mistress. However, this is an effective structure for this poem as the speaker is not trying to convey a clear argument unlike in To His Coy Mistress. The whole poem instead depends on the extended metaphor of the onion. "I give you an onion" says the speaker and various aspects of this onion are discussed as the poem develops, each with a particular significance for love. As if to make up for its lack of structural firmness; as the main metaphor is the onion itself, the subsidiary metaphors appear one by one in each stanza, so the structure becomes more complex instead. ...read more.

However, as Valentine is more recent, its language is less complex and alien to the reader. Duffy's language and vocabulary is very straightforward to perhaps suggest that she wants a simple, uncomplicated love. She uses many metaphors to get her point across to the listener. It is also very informal - with a purpose, as Duffy doesn't want to come across as being stereotypical (most clich�s are formal). The structure, where Duffy makes short statements in preference to stanzas also adds to the language. They make the poet, Duffy, sound definite and authoritative. This can imply that the poem was a message to a former lover, whom she wanted to address in an intrepid manner. Thus, we bring to a close this analysis. In conclusion, Valentine try's to destroy the myth of commercial love. To His Coy Mistress however is trying to promote the physical side of love. The use of metaphors plays an important role in both poems as does use of poetic imagery. In my view Carol Ann Duffy seems to have a better understanding of love. Overall I prefer Valentine because it is irregular and it uses many effective images. I like the way some words are isolated because it makes them outstanding and more important, it makes you try to thing what they mean. Remember that you don't choose love. Love chooses you. You can only embrace it when it arrives and give it away when it comes to you. But if it chooses to leave from your heart or from the heart of your lover, there is nothing you can do and there is nothing you should do. Love always has been and always will be a mystery. ...read more.