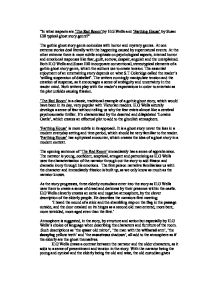 "In what respects are 'The Red Room' by H.G.Wells and 'Farthing House' by Susan Hill typical ghost story genre?" The gothic ghost story genre coincides with horror and mystery genres. At one extreme stories deal literally with the happening caused by supernatural events. At the other extreme there is more subtle emphasis on psychological aspects, internal horror and emotional responses like fear, guilt, sorrow, despair, anguish and the unexplained. Both H.G Wells and Susan Hill incorporate conventional, stereotypical elements of a gothic ghost story genre, which the authors use to create tension. The essential enjoyment of an entertaining story depends on what S.T Coleridge called the reader's 'willing suspension of disbelief'. The writers cunningly manipulate tension and the creation of suspense, as it encourages a sense of ambiguity and uncertainty in the reader mind. Both writers play with the reader's expectations in order to entertain as the plot unfolds causing frission. 'The Red Room' is a classic, traditional example of a gothic ghost story, which would have been in its day, very popular with Victorian readers. H.G Wells astutely develops a sense of fear without telling us why the fear exists almost like a cerebral psychosomatic thriller. It's characterised by the deserted and dilapidated 'Loraine Castle', which creates an effectual plot to add to the ghoulish atmosphere. 'Farthing House' is more subtle in its approach. It is a ghost story never the less in a modern everyday setting and time period, which should be very familiar to the reader. 'Farthing House' has a physical encounter, which creates the idea of a ghost story in a modern context. The opening sentence of 'The Red Room' immediately has a sense of apprehension. The narrator is young, confident, sceptical, arrogant and patronising as H.G Wells uses the characterisation of the narrator through out the story to add frisson and dramatic irony through his emotions. The first person narrative familiarises us with the character and immediately frission is built up, as we only know as much as the narrator knows. ...read more.

The narrator later, in attempt to relight the candles, strikes his knee on the bed before falling down the stairs just like the past tragedy in the Red Room. The setting of the scene immediately changes. H.G Wells makes a contrast of the dark, evil night to the light, safe morning. It is in the safe morning, where the narrator explains the ordeal of the red room to the custodians. With the narrator in the daylight, where he feels safe, he says, "There is neither ghost of earl nor ghost of countess in that room, there is no ghost there at all; but far worse...." "Fear". It is then the story ends in a dramatic climax, in which he explains that, theirs no ghost but fear, which are built inside by the actions of others. There is so much fear that it leads to mental paranoia. For example, the narrator speaks about an unexpected presence. "...as one might start and see the unexpected presence of a stranger." That presence was the creation of paranoia in the mind of the narrator. H.G Wells cleverly leaves the story quite open. As the ending, raises more questions than the story can answers. 'Farthing house', by Susan Hill, starts the story, almost exactly like The Red Room, in the way that, both narrators' create suspense in the opening paragraph. 'Farthing house' is also written in the first person narrative, as this seems to be a direct technique in which a ghost story writer uses to be direct and to express the fear and panic that the narrator illustrates to the reader. "I have never told you any of this before-I have never told anyone, and indeed, writing it down and sealing it up for a future date may still not count for 'telling'. But I shall feel better for it, I am sure of that." Straight away the narrator is showing some urgency and anxiety to the reader. ...read more.

For example in 'The Red Room' the other characters had a major part in the build up of tension. Where as in Farthing house, the characters played a smaller role in creating tension but instead create a negative atmosphere. The narrator tells the reader that she feels 'terrible melancholy' as she creates a cold atmosphere within her cleverly described emotions. The narrator tells the reader, straight after the encounter, that at the second encounter the ghost was present. She also admits that she is 'depressed,' and 'distressed,' due to the encounters with the ghost. The narrator ends the story by adding an ominous atmosphere to create frission. She tells the reader that 'it was dark, dreadful, helpless feeling and with no sense of foreboding.' The concluding part of the story, Susan Hill explains to a larger extent than H.G Wells. Susan Hill creates a more of a conclusion where as 'The Red Room' leave's the reader to draw his or her own conclusions. At the last parts of the story, the narrator stumbles across a gravestone at a nearby church. This gravestone belonged to a mother who died with her infant. She then goes to the vicar for answers, and the vicar explains as her sentiments are centred on pity and sorrow. Both writers' techniques, in creating setting, atmosphere and tension all seem to be similar in a way. But Hill uses little hints of the genre to give slight more expectations of a ghost. Hill uses the past in creating referable links from which deductions can be made. For example: the women who encountered a ghost, which was reported on the newspapers. She develops the characters by creating atmosphere, for example the bad events that later builds up to create tension. Where as Wells uses the narrators mental psych of the setting. Both stories have build up a really ominous atmosphere of a ghost story genre. By Wells seems to incorporate the classic genre elements, which the readers are more familiar with. ...read more.