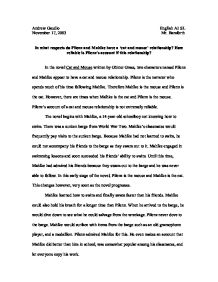 In what respects do Pilenz and Mahlke have a 'cat and mouse' relationship? How reliable is Pilenz's account if this relationship?

Andrew Gaudio English A1 SL November 17, 2003 Mr. Bamforth In what respects do Pilenz and Mahlke have a 'cat and mouse' relationship? How reliable is Pilenz's account if this relationship? In the novel Cat and Mouse written by G�nter Grass, two characters named Pilenz and Mahlke appear to have a cat and mouse relationship. Pilenz is the narrator who spends much of his time following Mahlke. Therefore Mahlke is the mouse and Pilenz is the cat. However, there are times when Malhke is the cat and Pilenz is the mouse. Pilenz's account of a cat and mouse relationship is not extremely reliable. The novel begins with Mahlke, a 14-year-old schoolboy not knowing how to swim. There was a sunken barge from World War Two. Mahlke's classmates would frequently pay visits to the sunken barge. Because Mahlke had not learned to swim, he could not accompany his friends to the barge as they swam out to it. Mahlke engaged in swimming lessons and soon succeeded his friends' ability to swim. Until this time, Mahlke had admired his friends because they swam out to the barge and he was never able to follow. ...read more.

As a result, his cousins refer to Mahlke as Mister Mahlke. This is an example of the Mouse destroying the cat. Throughout the novel, the reader is told that Mahlke had sex with the wife of the commander of the Labor Service battalion. Later on in the story, Mahlke and Pilenz are walking one night when they see Tulla Pokriefke. Mahlke decides go out with her for the evening. Although we are not told, Mahlke probably slept with her and engaged in sexual activity. Pilenz describes his accounts of his chances with the opposite sex. He states that he has been unsuccessful. In this situation, as is the one above, Mahlke is the mouse whom Pilenz the cat follows. This situation also marks the turning point of the cat and mouse relationship. Mahlke was supposed to go back to the army the night he went out with Tulla. He was on a few days leave before he met Tulla. Because he did not want to get punished for returning back to the army late, he decides not to go to the army. ...read more.