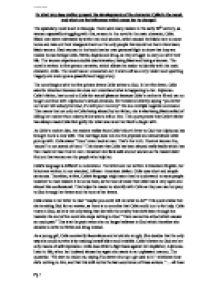 In what way does Walker present the developments of the character Celie in the novel, and what are the influences which cause her to change?.

In what way does walker present the developments of the character Celie in the novel, and what are the influences which cause her to change?. The epistolary novel is set in Georgia. There were many racism in the early 20th century, as women especially struggling with this, as seen in the novel in the main character, Celie. Black men were mistreated by white men and women, which caused the black men to come home and take out their disappointment on the only people that would not harm them back, black women. Each woman in the book has her own personal fight to show that they are indeed human beings Celie, Nettie, Sophia and Shug, as they struggle to carry on with their life. The women experience double discrimination, being black and being a woman. The novel is written in first person narrative, which allows the reader to identify with the main character, Celie. The novel has an unusual set out; it starts off as a very violent and upsetting tragedy and ends up as a peaceful and happy story. The novel begins with the first private letters Celie writes to God. In her first letter, Celie asks for direction because she does not understand what is happening to her. ...read more.

Celie trusts in God, as he is the only being that she tells the cruelty that she's been through but towards the end of the novel she stops writing to God "There cannot be a God which causes so much pain" This is at the point when she no longer believes in God which therefore she decides to write to Nettie and Shug instead. As a young girl, Celie constantly faces abuse and is told she is ugly. She decides that the only way she could survive is by making herself silent and invisible. Celie's letters to God are her only means of self expression. Celie does little to fight back against her stepfather, Alphonso. Later in life, when her husband abuses her again she reacts in an unpleasant manner, The quotation "He start to choke me, saying You better shut up n git used to it," reinforces how she's nothing to him, and that this will not be the last occurrence of these actions. "... all I can do not to cry. I make myself wood. I say to myself, Celie, you a tree. That's how I know trees fear man." The reader can see that Celie has lost her feelings, she is numbing out the pain of being beaten through comparing herself to a tree this shows that she cannot fight back physically but only within herself. ...read more.

The self esteem Celie gain changes her into a happy, successful, independent woman. Celie takes up her hobby of sewing and turns it into an opportunity for a profitable business. When Nettie, Olivia, and Adam return to Georgia from Africa, Celie's circle of friends and family is finally reunited. Although Celie has tolerated many years of hardship, she says, "Don't think us feel old at all. . . . Matter of fact, I think this the youngest us ever felt." This quote states that the returning of Celie's sister and children has made her start fresh to life as she feels almost like she is reborn. In conclusion Walker presented the development of Celie by using a shy and almost apologetic tone of voice in her letters to God to portray the years of abuse she has experienced. This later transformed into a loud and a confident tone of voice which was directed to Nettie and Shug rather than God. This transformation was influenced by the build up of the abuse and harassment Celie had to put up with over the years. Therefore when given a chance to change for the better, she took it, to become the successful woman she has become in the end of the novel. ?? ?? ?? ?? Rana sak Pg 1 ...read more.